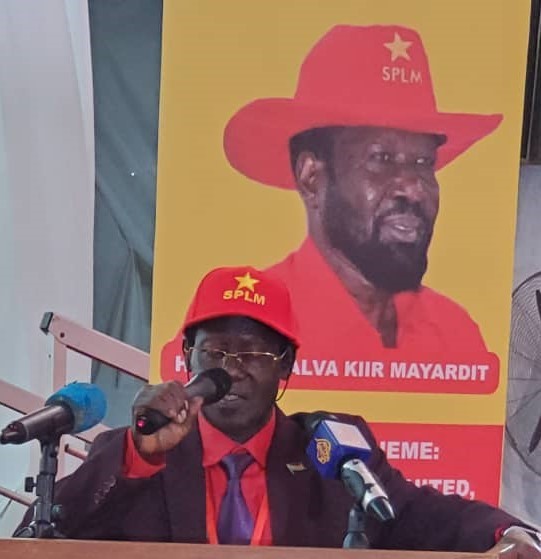 The newly appointed 18 members to the political bureau of Sudan People’s Liberation Movement (SPLM) will be sworn in Tuesday at Freedom Hall in Juba.

“The meeting had to be adjourned because there are issues that were not prepared, one of them is swearing in of new three deputy chairmen, the secretary general plus two deputies, and new members of the political bureau and national liberation council,” Kuol Atem Bol, the SPLM Secretary for Political Affairs and Mobilization  told journalists in Juba on Monday.

He was speaking after the SPLM National Liberation Council meeting that commenced last week was called off on Monday to prepare for the swearing in of the newly appointed secretary general Peter Lam Both and his deputies.

This was once done will pave way for swearing in of the new members of the political bureau the highest decision making organ of the SPLM.

The political bureau members have been increased to 35 from the previous 17 members.

Bol also said that party leaders from the 10 states plus three administrative areas endorsed President Salva Kiir as the party flag bearer in the upcoming election to be held in February 2024.

“Once you rebel against the party it does not need a decree to relieve you, we have the new appointment of first deputy chairman that was a position held by Riek Machar, the whole structure of political bureau is complete,” he said.