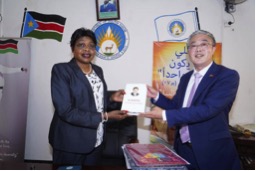 I. Meeting with Hon. Governor of the WBGS

On Oct.11-12, Amb. MA Qiang made his first visit outside of the capital city Juba to Wau in Western Bahr el-Ghazal State (WBGS), so as to further leverage the sub-national cooperation between China and South Sudan.

When meeting with Hon. Sarah Cleto Rial, Governor of the WBGS, Amb. MA reaffirmed his commitment to consolidating the friendship between Chinese embassy and the WBGS as the new Chinese ambassador to South Sudan. He commended the achievements of WBGS under the leadership of the State government in terms of promoting peace process, national unity and social progress over the years. He also emphasized that China stands ready to deepen cooperation with WBGS in the fields of agriculture, trade, education, health, small and medium-sized enterprises, and infrastructure, making the State an exemplary area in China-South Sudan sub-national cooperation.

Hon. Governor briefed Amb. MA the recent situation of WBGS and assured him that the WBGS government will strive to provide secure environment for Chinese enterprises, institutions and personnel in the State.

Amb. MA said that this China-aided project, as a concrete measure to implement the “Belt and Road Initiative”, is a gift for the South Sudanese people and a symbol of the sisterly relations between China and South Sudan that will enhance regional connectivity and bring tangible benefits to the people in WBGS.

Hon. Governor thanked the Chinese government for aiding the Jur River Bridge project, appreciated with satisfaction the important progress made in the project construction, and expressed her expectation for the early completion of this project.

The China-aided Jur River Bridge will be 1,480m, including a 230m long bridge section and a 1,250m long approach. So far, the main body of the Bridge has been cast and is estimated to be handed over to the South Sudanese side by next July. Upon completion, this Bridge will act as an important channel for regional connectivity and humanitarian relief supplies.

III. Attending the Medal Ceremony of the 12th Chinese Peacekeeping Contingents in Wau.

In his remarks, Amb. MA congratulated all the Chinese peacekeepers on being awarded the United Nations Peacekeeping Medal. He pointed out that the 12th Chinese Peacekeeping Contingents in Wau have made positive contributions to maintaining peace and spreading friendship, thus been highly praised by UNMISS and the government and people of South Sudan. He also stressed that the medal of honor was not only a commendation for 12th Chinese Military Contingents, but also recognition for China’s active participation in international peacekeeping operations.

The 12th Chinese Peacekeeping Contingents in Wau consist of the Horizontal Military Engineering Company (HMEC) and a Level-2 Hospital. Since their deployment to Wau last December, they have successfully completed various tasks assigned by UNMISS. Meanwhile, they have managed to provide assistance to local residents, including free clinics, donations and cultural exchanges.