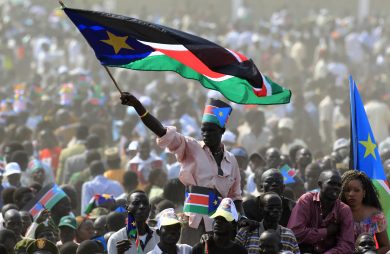 Board of Trustee of National Conversation South Sudan rejected call for the regime change through a protest called by People’s Coalition for Civil Action.

They said although peaceful protest is the rights for the groups or individual, the citizens should first understand the level of political awareness or socio -economic development of the country so that they can carry out the peace full protest.

In a press statement extended to City Review and to the public at large, the organization described the protest as “Not the correct action for consideration” based on the objective and realities of the country.

“At the time when the country is being run by the unity government compose of conflicting political parties and ideologies with intend to rule the same country. The national Conservation South Sudan is concern that the scrupulous power elite with vested interest may take the advantage of this opportunity to capture the State,”Statement read.

“This can only have a negative impact on an already precarious situation in our nascent Republic,”they have added in the statement.

Chief Executive Officer of national Conservation South Sudan,Bol Joseph Agau said in the statement that the matrix of implementation of peace agreement is about to elapsed .He  warned that without any recommitment and negotiation extension and with lack of political awareness to the civil population is disaster.

“The national conservation South Sudan will not promote violence for other people’s children to die because we believed the real uprising is one of the consciousness and that can only be achieve through political education,” he said.

He said the organization has learnt the harsh economic situation in the country and any poorly planned action motivate peaceful demonstrator to turn into looting of the private and public entities in capital Juba.

“It is ill advised to advocate for a regime change that would not be sustainable due to lack of indigenous participation and lack of political awareness of the civil population of South Sudan,”hesaid.

His warning came following the issuing of the statement calling on citizens to de-associate themselves from looming planned demonstration against the government of South Sudan.

Governor Emmanuel Adil Anthony convened an emergency meeting with all the state Unions ranging from Chamber of Commerce, Workers Trade, Women, Youth and Bodo-Boda to categorically brainstorm on the uninformed position taken by the so-called People’s Coalition for Civil Action –South Sudan to stage a demonstration against the implementation of the Revitalized Peace Agreement.

There has been social media information over the past weeks by an alleged group of influential South Sudanese mobilizing mass to stage massive demonstrations across the country.

The group is said to have planned to go to the streets at the end of the month to pressure parties to fully implement the revitalized peace agreement or force the current regime to resign.

However, the unions of the government of Central EquatoriaState condemned the move and called on all people of the state not to join the group.