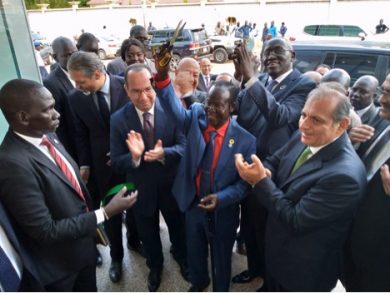 The National Bank of Egypt on Tuesday announced the opening of it’s branch in Juba, the capital of South Sudan.

“This bank will strengthen the relationship between the two countries in terms of trade, economic, and many other fields,” Wani said during the launching ceremony attended by high ranking officials.

The state-owned bank was approved by the South Sudan government in April 2021 to start operation in the youngest nation.

“We have signed a number of memorandum of understanding (MoU) with the sisterly country of Egypt, blessed by the two Presidents, President Salva Kiir Mayardit and President Abdel Fattah Al-Sisi,” Wani said.

Hisham Okasha, Chairperson of the Board of National Bank of Egypt, said that their presence in Juba will boost cooperation and development in Africa.

“The National Bank of Egypt is the largest bank in Egypt, it was established in 1898 and we have a very strong strategy in our expansion within Africa,” said Okasha.

The Egyptian Bank already has presence in Khartoum, the capital of Sudan.

NBE has an extensive network of 553 branches, offices and banking units worldwide.

It has subsidiaries in Sudan, New York, South Africa, United Arab Emirates and in other countries.