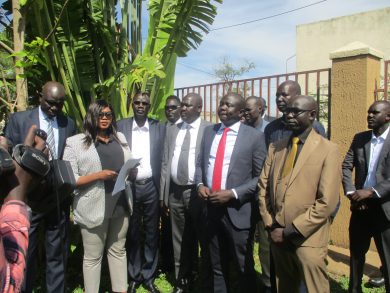 A group of 12 officials from South Sudan United Front/Army has defected and joined the ruling party under President Salva Kiir, one month after resignation from Gen. Paul Malong’s party

The South Sudan United Front/Army (SSUF) is led by Gen.Paul Malong Awan, the former Chief of Staff of the country’s national army alongside others.

“Our group here has resigned from SSUF/A) and declared allegiance to the government along with ex-forces and officials. We are now back to the country to actively be part of nation building and implement revitalized peace accord to its fullest potential,” said Nyamach Nyang Chol, the former Spokesman of South Sudan United Front/Army upon arrival at Juba International Airport on Tuesday.

Ms. Nyang discouraged young people from rebelling against the government.

“I strongly discourage youth from rebelling. Rebellion affects families, friendship, makes you redundant, and can spoil your talent. It is a complete waste of time,” she said.

“Today May 3, we have received a very high delegation led by Gen. Makuach Lual and a number of generals joining the peace process and its implementation,” he said.

According to Malek, the return of the group to Juba would strengthen a smooth implementation of the 2018 peace agreement.

“Their coming will add value to peace implementation. This is a part of peace building. They have taken a very critical decision to come and support the peace process,” Malek reiterated to the reporters in Juba.

As of recent, many young people have continued to join Gen. Paul Malong’s party for various reasons, but the intention of the U-turn made by the twelve officials isn’t clear.

In March 2021, the holdout groups including Paul Malong’s party inked the Declaration of Principles (DoP) during Rome peace initiative series of talks in the Kenyan town of Naivasha to support the revitalized peace deal.

The DoP signing constitutes the basis for the subsequent political dialogues to resolve severe national crises in the country.

It was the first time the holdouts reached a deal with the government since the signing of the Revitalized peace accord in 2018.

But the motive behind the rampant defection is yet to be known.