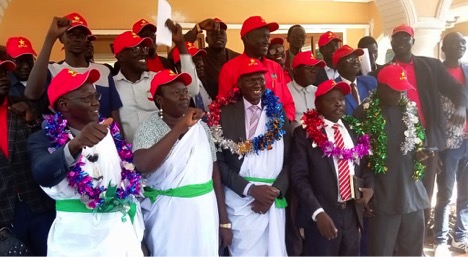 The Sudan People’s Liberation Movement (SPLM) under President Salva Kiir on Tuesday welcomed 472 members who crossed over from the opposition.

Santo Malek, the Acting Secretary for Political Affairs and Mobilization in the SPLM said the 472 opposition members who ditched their parties will strengthen their support as they prepare for the 2024 election.

“Things are coming for the future, for sure after the transitional period there will be election and their (opposition) coming back will add value to what we are doing within the SPLM,” said Malek as he received the defectors at the SPLM party headquarter in Juba.

The prominent members of SPLM-IO who crossed over include, Mary Akon Majok, the former Deputy Governor of Lakes State, John Uyual the former Minister of Finance in Jonglei State and Aleu Garang Aleu, a member  of SSUM.

Majok, the former Deputy Governor for Lakes State, said they are happy to rejoin the mother party because of it’s improved internal democracy.

“We members of the SPLM-IO have rejoined our mother party the SPLM, we feel very proud that we have been welcomed by the secretary general, the whole secretariat and the public of South Sudan,” said Majok.Under the 2018 revitalized peace agreement, South Sudan was supposed to hold election in 2023 but this was recently extended under the new roadmap signed by