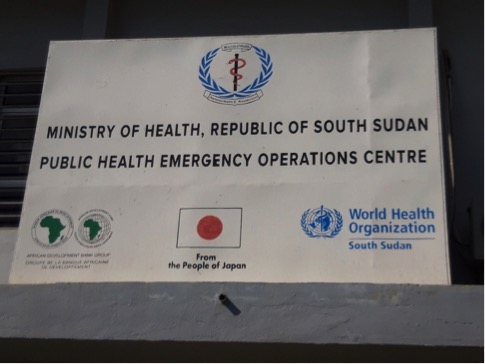 The ministry of health through the emergency operation Centre at a meeting convened for health partners on Tuesday revealed its intention to send teams to the border areas in order to combat Ebola transmission in South Sudan.

This comes a day after health authorities and World Health Organization (WHO) in Uganda confirmed a case of the relatively rare Sudan strain on Tuesday.

The declaration happened when the 24-year-old man in Uganda’s, Mubende district showed symptoms of Ebola and later died.

Dr. Victoria Anib Majur, the undersecretary ministry of health South Sudan says they have activated the emergency operation center for response and preparedness in order to combat the deadly virus which is to be led by Dr. John Rumunu the Director General for preventive health services and incident manager.

Among the key activation tasks are the Technical working group, surveillance system and rapid response team.

Dr. Victoria says they are going to send two teams to border towns of Yambio and Nimule to do assessment and also possibly send another team in the next two weeks to other border areas within the country.

“We are going to send a team to Nimule and Yambio tomorrow, we will work with the MSF and partners to do health promotion and messages on Ebola Virus, giving daily updates and engaging with the ministry of health of Uganda” she stressed.

According to the ministry of health South Sudan has not registered any case but stressed that areas such as Juba, Nimule, Kaya, Yambio, Ezo, Maridi, Kajokeji, Tambura and Yei are border areas of Uganda and DRC hence placing South Sudan at a high risk from Ebola outbreak.

Due to the urgency, South Sudan has put its readiness checklist capacity at 61% from 37%.

Due to insecurity and torrential rains South Sudan is unable to reach all border areas because of the many porous entry points in the bushes were people use to sneak in and out of the country.

Most South Sudanese people love eating bush meat but the sad news of Ebola poses a threat to the delicacy after Dr. Victoria warned them on the consequences.

She has however called on South Sudanese to deploy utmost vigilance and care on those who present symptoms.

On his part Dr. Fabian Nzendako, World Health Organization country director says due to the proximity of Uganda to South Sudan it’s imperative to have a quick response on prevention.

“We don’t have a case in South Sudan, but given the proximity we have to prepare. It is not the first time we activating the incidence management system of Ebola, the activation helps us prepare and respond”. he adds.

Dr. Fabian has however reiterated WHO’s readiness to help the ministry of health to combat the deadly virus. He however stressed worry since Ebola virus is appearing at a tough moment when the world is dealing with multiple public health threats.

“As you are aware, we are still in covid19 pandemic, monkey pox and Ebola” he noted.

However, Dr. Fabian says they already have systems that the government and the partners had put in place before which they will use to build on to provide regular updates.

There has been seven previous outbreaks of the Ebola Sudan strain, with four occurring in Uganda and three in Sudan. Uganda last reported an outbreak of Ebola Sudan in 2012.

In 2019, also experienced an outbreak of Ebola Zaire. The virus was imported from neighboring Democratic Republic of the Congo which was battling a large epidemic in its north-eastern region.

According to WHO, It is thought that fruit bats of the Pteropodidae family are natural Ebola virus hosts. Ebola is introduced into the human population through close contact with the blood, secretions, organs or other bodily fluids of infected animals such as fruit bats, chimpanzees, gorillas, monkeys, forest antelope or porcupines found ill or dead or in the rainforest.

Ebola then spreads through human-to-human transmission via direct contact (through broken skin or mucous membranes) with:

Blood or body fluids of a person who is sick with or has died from Ebola.

Objects that have been contaminated with body fluids (like blood, feces, vomit) from a person sick with Ebola or the body of a person who died from Ebola.

Health-care workers have frequently been infected while treating patients with suspected or confirmed EVD. This occurs through close contact with patients when infection control precautions are not strictly practiced.

Burial ceremonies that involve direct contact with the body of the deceased can also contribute in the transmission of Ebola.

People remain infectious as long as their blood contains the virus.

Pregnant women who get acute Ebola and recover from the disease may still carry the virus in breast milk, or in pregnancy related fluids and tissues. This poses a risk of transmission to the baby they carry, and to others. Women who become pregnant after surviving Ebola disease are not at risk of carrying the virus.

If a breastfeeding woman who is recovering from Ebola wishes to continue breastfeeding, she should be supported to do so. Her breast milk needs to be tested for Ebola before she can start.

According to WHO, the incubation period is the time interval from infection with the virus to onset of symptoms, from 2 to 21 days. A person infected with Ebola cannot spread the disease until they develop symptoms.

The Symptoms of EVD can be sudden and include Fever, Fatigue, Muscle pain, Headache, Sore throat which is later followed by Vomiting, Diarrhoea and Rash.