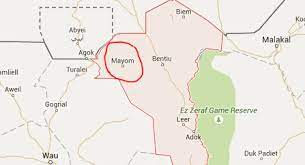 Tot Jokchieng Nyuon, Acting minister of health and minister of education blamed the spike in malaria cases on flooding. In August, 2,000 cases of malaria were reported in Mayom County.

“We have talked to humanitarian health partners to rescue Mayom residents from malaria,” Nyuon told Juba Echo in an interview in Bentiu town.

He said that few health facilities are functioning in Mayom County because several others have closed operation due to heavy flooding since the start of this year.

“We have admitted some malaria patients outside because the rooms were fully occupied, now we ordered mobile teams for door-to-door treatment in the villages,” said Chan.