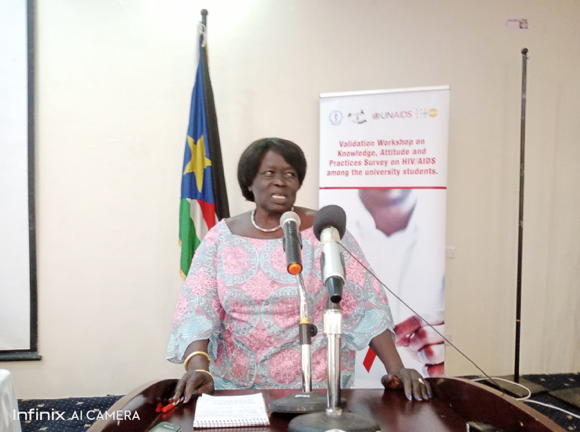 The HIV/AIDS epidemic could send many young people in South Sudan to their graves while still in their prime if the government does not step up funding for sensitization and awareness.

Achol Ayom Dor, the Deputy Chairperson South Sudan HIV/AIDS Commission Thursday, said they lack enough budgetary funding to reach out to the population in the countryside that remains oblivious of HIV/AIDS.

“I am begging, asking the government please please fund well the HIV/AIDS commission,” said Dor during the validation workshop at Dembesh Hotel in Juba, the capital of South Sudan.

“In South Sudan, the knowledge about HIV/AIDS is very low, there are areas where there is no awareness, the partners are not funding awareness,” she disclosed.

Dor said the responsibility of creating awareness falls squarely at the feet of the transitional unity government because development partners are there to fill gaps in the health sector.

“We (government) are doing the opposite, even that gap we are not filling it well,” she said.

Dor said that the HIV prevalence rate remains at 2.1 per cent in South Sudan with an estimated population of 13 million.

She disclosed that Western Equatoria, Lakes state, and Jonglei state are some of the hotspot areas with the highest HIV/AIDS prevalence in South Sudan.

Francis Tukwasibwe, the Program Coordinator for the United Nations Population Fund (UNFPA), said that they are supporting the prevention and treatment of HIV/AIDS across the country.

“We provide condoms, we also have drugs, and we are doing that for prevention purposes and also for treatment,” said Tukwasibwe.

He revealed that UNFPA is partnering with national NGOs to extend HIV/AIDS prevention and treatment programs in hard-to-reach areas.