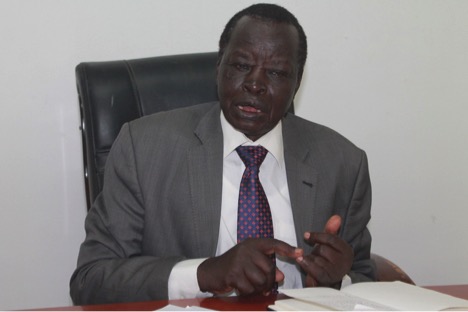 Plans to implement the security arrangement as part of the peace deal to end crisis in South Sudan ought to be put on hold to give room for engagement with a breakaway faction of the main opposition group, Sudan People’s Liberation Movement/Army-in Opposition, a senior member of parliament said.

The breakaway faction of the SPLM/A-IO is led by Gen. Simon Gatwech Dual, a former close ally to First Vice President Riek Machar who heads the opposition group.

Gen. Salva Mathok Gengdit has asked President Salva Kiir Mayardit and Machar to engage Dual’s group that broke away from the main SPLM/A-IO led by Machar on the pretext that security arrangement was being delayed.

“The critical part of the (peace) agreement is the security arrangement, it’s very sensitive and needs to be approached in transparent manner, and otherwise it can push us back to war again,” Gengdit told Juba Echo in an exclusive interview.

He said the citizens are already weary of war following years of devastating conflict since outbreak in December 2013.

“We don’t want any unnecessary confusion that may come through the security arrangement,” he said.

Dual’s faction alias Kit-Gwang now based in Magenis border area with Sudan broke away from Machar’s SPLM/A-IO accusing the latter of not doing enough to push the SPLM-In Government (SPLM-IG) under President Kiir to expeditiously implement the security arrangement.

The group blamed Machar for also abandoning his soldiers in squalid training and cantonment centers without medicines, food and safe clean drinking water.

In addition, it blamed the former rebel leader of nepotism after he appointed his wife Angelina Teny as defense minister.

Dual’s group also accused the latter of weakening the hand of the former rebel movement in the coalition government.

“My advice to the President and FVP Machar is that they should delay the graduation of unified forces and dig out the objectives and motives of Gen. Dual who is accusing Machar and SPLM-IG of conniving to frustrate security arrangement,” said Gengdit who is also a battle- hardened soldier having fought in the liberation war against Khartoum.

He disclosed that they are already working with the Revitalized Joint Monitoring Evaluation Commission (R-JMEC) and the Joint Defense Board (JDB) to come up with modalities on unification of the 83,000 since the army already has three army units that include infantry, Riverine (Navy) and Air force.

Gengdit revealed that the SPLA-IO forces are mainly infantry, and hurrying their deployment could disrupt the South Sudan People’s Defense Force (SSPDF) structure.

“When the SPLA-IO are hurriedly integrated into the SSPDF, the issue of seniority, experience among others may arise, take for example of the National Security Services (NSS) they are representing all the tribes in the country. If any forces are going to NSS, what are the modalities to be considered,” wondered Gengdit.

He said talk on unification of the army command structure poses serious problems since Dual allegedly deposed his Commander-in-Chief Machar.

In addition, Dual he said is busy mobilizing his troops for probably confrontation with the transitional unity government.

“He (Dual) is accusing Machar of surrendering the Nuer cause, he is also accusing the government of the day in juba of failing to implement the peace agreement. He is now looking for political and military allies and he is also contacting the other hold-out groups,” said Gengdit.

“They are now fighting among themselves, and that will cause displacement of people in those areas and government is keeping quiet on that. One may ask questions because this area of security arrangement is very delicate and sensitive, if it’s not done well with clear guidelines it may take us into another confusion leading to war,” he observed.

Gengdit was quick to clarify that he is not against peace implementation, but rather raising genuine concerns that if neglected could scuttle ongoing efforts to smoothly implement the security arrangement.

In July 2016, the country was engulfed into another devastating conflict caused by disagreement between the SPLA-IO and SPLM-IG over security arrangement.

The conflict spread insecurity in once peaceful Greater Equatoria region and displaced thousands.

“I am against something that will destabilize the country. Let us go slowly with the security arrangement, if we rush it may put us into war again,” said Gengdit.