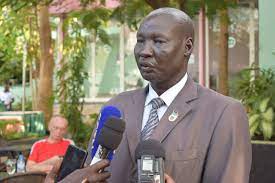 The Chairperson of Information, Communication, Technology, and Postal Services in the Revitalized Transitional National Legislative John Agany Deng has defended the medical allowance of 15,000 U.S dollars given to MPs.

“People received the issue of our medical allowances negatively, the MPs are not thieves they are paid legally, we have lost 60 MPs who have died hopelessly with minor sickness that can be treated,” Agany told journalists at parliamentary chambers in Juba on Thursday.

Agany said it’s their constitutional right as MPs to be given that money.

Agany added that the money was given to them to help themselves to seek medication.

National members of parliament have received 15,000 dollars each as part of their medical allowances for this financial year.

Previously, opposition politicians and human rights bodies criticized the legislators over such payment while the majority of citizens are suffering in the country.