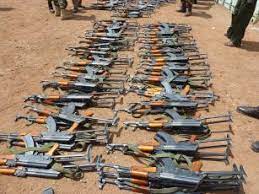 The police in Koch County have started registering guns held by civilians in a bid to mitigate inter-communal violence and revenge killings.

This was revealed on Tuesday by brigadier Tut Wal Dang the director of police in Koch County.

“We have have started registration of guns and its voluntary registration agreed by all armed youth, we are not disarming them, but we need to know the number of people who are holding guns in seven Payams of Koch county,” Wal told Juba Echo in an Interview in Koch town.

This development is the first ever gun registration in Koch County.

Wal said they have set up transport incentive of 4,000 South Sudanese Pounds for those who register their guns.

“After we register the gun, each person is given 4,000 South Sudanese Pounds to return back, this is for transport,” said Wal.

Wal emphasized that the move is not to disarm the youth but rather to help reduce criminal activities and cattle raiding.

Koch County is among the counties in South Sudan with high number of illegal guns.

“Guns registration is to know the number of guns, and which guns belong to so and so, it will be easy to track someone who will continue with criminal activities,” said Gatkuoth.