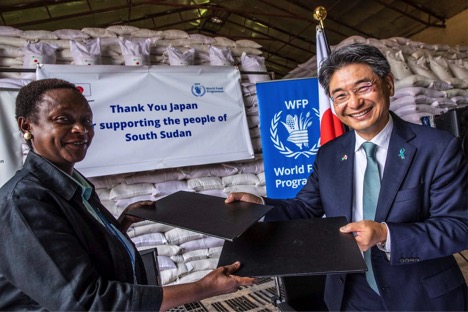 “It is my hope that this Japanese food assistance will alleviate the suffering of the people of South Sudan and assist the country in pursuing development and prosperity,” TSUTSUMI Naohiro, Ambassador of Japan to South Sudan said in a statement issued by WFP in Juba on Wednesday.

“I am also hopeful that South Sudan will unleash its huge agricultural potential to increase food security for all its citizens in the future. Japan continues to support South Sudan’s efforts to this end,” he added.

This latest financial support will be used to assist more than 7.74 million people who are severely food insecure across the country.

It will also aid 1.3 million children, 683,000 pregnant and lactating women who are expected to be malnourished this year.

The first grant of JPY400 million equivalent to 3 million dollars will be used to procure 1,500 metric tons of rice that will assist 41,500 people facing severe food insecurity.

The second contribution of 6 million dollars will be used to procure cereals, oil, and pulses to assist around 234,000 people later in the year.

“These two generous grants come at a critical time when the unprecedented food insecurity situation in South Sudan is deteriorating even further,“ Walker said.

“While humanitarian needs are increasing sharply across the region and globe, we are grateful to see that Japan is maintaining its attention and commitment to supporting the people of South Sudan,” she added.

The government of Japan has supported WFP’s work in South Sudan since 2013; it has contributed more than $44 million dollars.