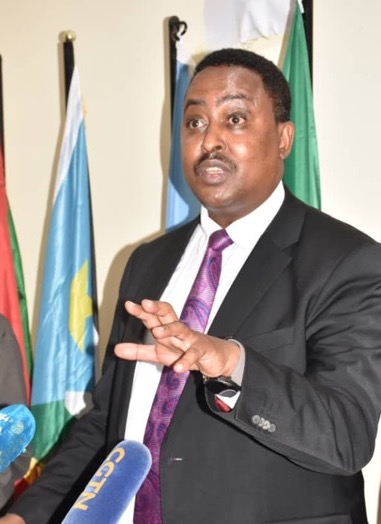 The visiting Intergovernmental Authority on Development (IGAD) Executive Secretary Workneh Gebeyehu has urged rival opposition factions to cease hostilities due to fears of a possible spillover effect on the fragile 2018 revitalized peace deal.

“We encourage this thing (conflict) be resolved internally, that will be the best way to solve this issue, if not it could have spillover effect on the peace process,” he told journalists in Juba on Friday.

The regional body mediated the 2018 revitalized peace deal signed in Ethiopia by South Sudanese parties to end more than six years of conflict since outbreak in December 2013.

Gebeyehu also plans to hold discussion with the breakaway SPLM/A-IO faction led by Machar’s former chief of staff Simon Gatwech Dual who is holed up in Magenis area near the Sudan border.

The fighting followed the recent declaration by senior officers of SPLA-IO led by Dual deposing Machar from the leadership of SPLM/A-IO while accusing him of nepotism and lacking strong leadership.

The breakaway faction also blamed the First Vice President in the transitional unity government formed in February last year of weakening the hand of the former rebel movement in the coalition government.

“The issue of SPLA-IO is an internal party issue but according to the peace agreement signed by all signatories SPLA-IO is one of the major signatory. If something is going to happen to that signatory in one way or the other that affects the peace process,” said Gebeyehu.

He disclosed that the region is wary of further violence weakening the ongoing peace process whose slow implementation on especially, the security arrangement is one of the main grievances among members of the breakaway faction.

South Sudan is supposed to graduate 83,000 unified forces comprising of police, army, intelligence and wildlife but this continues to delay despite assurances by President Salva Kiir.

These forces upon graduation are supposed to take charge of security during the ongoing transitional period.