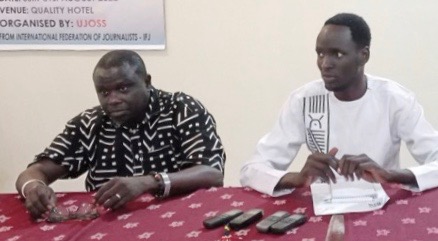 The director for Dakar based Africa office for the International Federation of journalists Louis Thomasi, has revealed that his organization in partnership with South Sudan’s union of journalist have concluded a two-day training in digital media for practicing journalists in South Sudan .

Director Louis made this disclosure on Wednesday while closing the training on digital media, trade union reforms and youth recruitment which took place from Quality hotel in Juba.

“We started this kind of training around April this year but it is not easy with IFJ protocol, there are criteria to be met that is why we even had to sign a contract this morning,” he said.

“I would love to take this opportunity to applaud UJOSS and IFJ for enhancing our skills in digital media, I hope that UJOSS will work together with other states in making sure that they also benefit from this capacity building exercise,” Rita added. .

Majak Daniel Kuany,the secretary general for the union of journalists of South Sudan appreciated the federation for their good gesture to the union and asserted that, the union is committed to soliciting  for capacity building opportunities and the  general  welfare of its members.

“We thank you for entrusting us and also thinking about South Sudan’s Journalists ,I believe the content that we have delivered will be an eye opener with potential to gain momentum when exploited,” he  said.

He added that the union of south Sudanese journalists are trying their best to create opportunities so as their members can access and benefit from it.