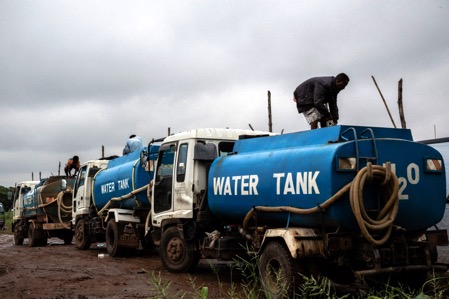 South Sudan’s capital Juba sits on the bank of Africa’s longest river, the Nile, but for residents to get the water, they must dig deep into their pockets.

After ten years of independence, the country has not yet got a pipe water system including in the capital and access is through water trucks managed mainly by foreigners.

A 250 liter drum sells between 500 and 1000 South Sudanese Pounds, depending on the distance from the river bank, and it’s more than double the sales for the same at the beginning of the year. In January, it sold between 200SSP and 400SSP.

For Rhoda Daniel who lives in Jebel Yeshua, on the far west of the capital Juba, access to a drum of water would cost between 800 SSP and 1000 SSP – and she is just a petty trader in the market.

“We can’t be able to cope with these prices because some of us can’t get 1000 SSP per day given the economic hardship the country is facing,” Daniel told Juba Echo in an interview.

“We are urging the government to construct for us piped water to save us from all these difficulties we are facing every day.”

Such hiking prices of basic commodities are common in South Sudan where a chaotic economic situation has led to a runaway inflation.

An economic policy by the Central Bank to provide $8 million weekly on the market has reduced the exchange rate of the US Dollars on the parallel market and not prices of commodities.

Traders defend the high prices by claiming the SSP has been valued at the bank.

Water is a basic for human life and ironically, residents in South Sudan have to resort to dirty water in a country that sits on the bank of the world’s longest freshwater river.

National access to basic water is at 40 per cent and the challenges in the water sector remain critical, the United Nations Children’s Fund said in a briefing this year.

Poor maintenance of limited facilities and weak government institutions at national and state levels contribute to inequities in access to water and sanitation services, it said.

Cost of equipment is a major contributor to the hike in water prices in Juba, David Kolas, who has been supplying water for seven years to residents said.

“The issue of spare parts for the car is forcing us to increase the prices of the water. The spare parts are becoming very expensive nowadays,” Kolas told Juba Echo.

“When we convert the small pounds we are getting from the sale of water, it will not be enough to purchase spare parts, and that is why we are increasing the prices of water based on market demand of the U.S dollars.”

“The prices of fuel keep on increasing every day at various fuel stations in Juba and this is affecting our work and facing us to increase the prices of water in a bid to adjust to the market demand,” Taban told Juba Echo.

“If we tell our clients that we have increased the prices because of fuel, they would not listen to us,” he said.

A plan to develop the production of clean water for Juba residents, being implemented by the Japan International Cooperation Agency stalled when war broke out in South Sudan in 2013.