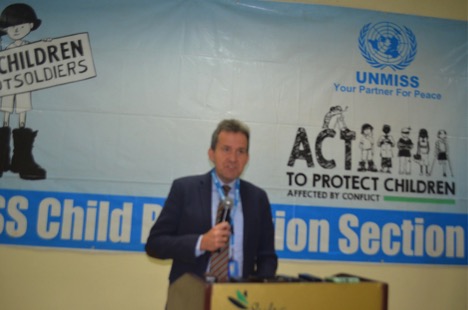 Ayuen Alier, the Chairperson of the National Disarmament, Demobilization and Rehabilitation Commission (NDDRC) said they are committed to implement the Action Plan signed in 2012 with UN to end the recruitment and use of children in government armed forces and other grave violations.

“Our government has signed and ratified the UN Child Protection Protocols in line with South Sudan Child Act and we aim to implement Action Plan with leverage from established UN task force in the country,” Alier said during training of journalists on child protection in Juba on Tuesday.

The Action Plan, originally signed in 2009 and renewed in 2012, resulted in the release of thousands of children, command orders banning child recruitment and use, as well as the creation of a SPLA unit dedicated to the protection of children.

Alier disclosed that they have already conducted numerous trainings across the country to boost the capacity of communities on child welfare and protection.

He particularly, said they have trained paramount chiefs of 79 counties, military commanders, judges and the police.

Jesper Moller, the UN Children’s Fund, Deputy Country Representative, said the training for journalists will empower them to transform and influence society.

“This training will enhance your capacity to report ethically and influence the opinion leaders in transforming the society,” Moller said.

Alfred Orono, the Representative of the United Nations Mission in South Sudan, said their child protection unit works with parties to conflicts to ensure that Child Protection Principles are implemented.