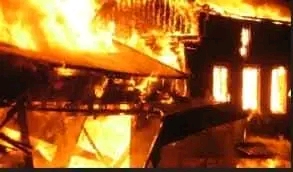 The Office of the Eastern Equatoria State Governor Louis Lobong has been destroyed following a sudden fire outbreak on Wednesday.

The fire that started at the main power supply system cascaded into various offices destroying files which officials say are from 1994 to 2019.

“We received a message this morning about the outbreak of fire at the state secretariat so we went there and we found that the fire is burning badly really,” he said.

“Because of the issue of fire trucks, we decided to use the one selling water to put off the fire. Although it had low pressure we struggled but good enough UNMISS came to help us very much, they helped us to put off the fire,” he added.

The official said the cause of the fire outbreak remains unclear as it started in the main power room adjacent to the governor’s main office.

“At the moment we don’t know the cause of the fire but it started in the insulation solar battery system, the one that connects rooms so we don’t know because we found that the fire started there,” he said.

Tomilian believes many files have been destroyed during the process

The official declares the beginning of fire assessment across all offices to avoid future occurrences of fire outbreaks in the state secretariat.

Eastern Equatoria State press secretary in the office of the governor Aliandro Lotok said investigations are underway to establish the cause of the fire.

“The fire started at the power room inside the building and unfortunately this is where all the files of Eastern Equatoria are kept particularly those from 1994-2019. All these files have been completely destroyed,” he said.