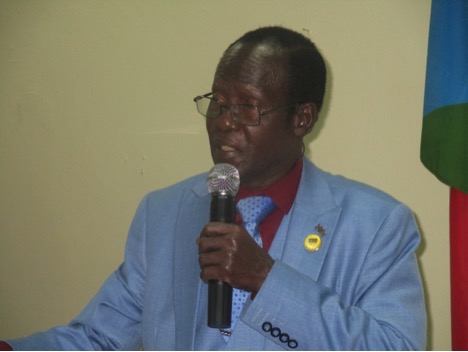 The government has promised to increase budgetary allocation to the agriculture sector in this year’s fiscal year to nearly 10 percent.

Dr. James Wani Igga, Vice President for Economic Cluster revealed that agriculture sector has been underfunded for the past years since independence in 2011, adding that increasing budget for the sector from the previous two percent will boost production.

“It (funding) will increase production of agriculture which has often been neglected, especially in rural areas,” said Igga during the opening of three-days national conference on agriculture and food security in Juba on Monday.

Igga disclosed that the Ministerial Economic Cluster is scrutinizing the 2021/22 budget for the ministry of agriculture and food and security.

UN agencies said that 7.2 million people out of estimated population of 12.2 million are food insecure this year, in addition to 1.4 million children at risk of malnutrition.

Conflicts and flooding have been the major causes of food insecurity this year, in addition to the invasion of desert locusts that ravaged crops.

Igga also said that they will support smallholder farmers to boost local production.

“We must promote agriculture because it will also employ our neglected gender, especially the women,” he said.

The World Bank last week said it will offer a grant of 116 million U.S dollars to South Sudan, part of which will support small holder farmers in the country..