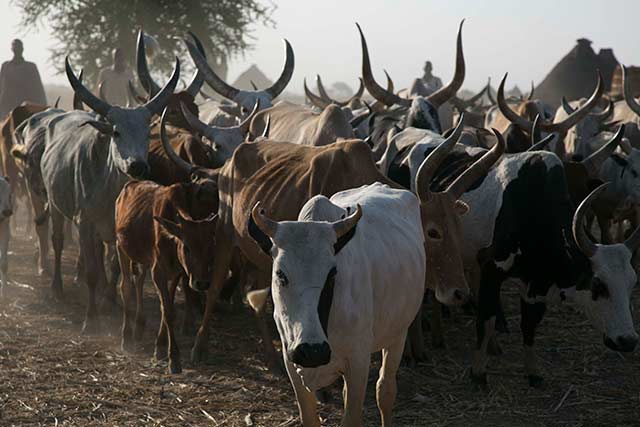 As floods pound heavily across South Sudan there are reports of related deaths including about a thousand livestock.
Local authorities have reported about 500 cattle being lost to floods in Mayendit County while reports from the northern part of Unity State suggest 70 also died in flood waters.

According to Mayendit Commissioner Gatluak Nyang, nearly 500 heads of cattle and 300 goats were reported to have died in flood waters.

Veterinaires Sans Frontieres, a nongovernmental organisation which works towards the health of animals warned livestock related diseases could soar as a result of the floods.

The organisation said 50 cattle died in Rubkona and 23 in Mayom counties.

Unity State Director of Animals and Fisheries, Mathew Matiek said the floods are having a heavy toll on both livestock and human lives.

Matiek said animals are being vaccinated against many diseases including the foot and mouth disease.

“The situation we are in is very bad. Seven counties of Bentiu are occupied by the water and people are using plastic sheets for evacuation,” he said.

Veterinaires Sans Frontieres (VSF-Suisse) has started vaccination in Rubkona County as an emergency humanitarian response and so far reached 4000 cattle with the shots in Rubkhona alone.

According to an official at the NGO, 10,000 livestock are being targeted across seven counties.

“We are urging the donors to looks at that area, and the government should to play a role to continue supporting us to achieve our activities,” Tongun said.