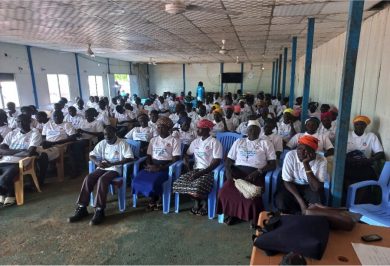 First ever peace conference held in Bentiu town on Friday.

The conference fronted by Nonviolent peace force protection women and youth protection teams took place at Naivasha hotel in Bentiu town with over 500 men and women in attendance.

Sarah Nyajuoy Bipal the Nonviolent Peace force unity state field officer in an interview with Juba Echo says the purpose of the women peace conference which ends today is to have unity beyond boundaries, one strength, one voice and one state adding that her organization will continue to organize and host such conferences in an attempt to broker for peace.

A 50-years old participant Nyanhial Thindil said the conference has permitted them to become agents and ambassadors of peace in unity state.

“Today Nonviolent Peace force has conducted a successful first ever conference in unity state where we talked about revenge killing, community retaliation, raping, harassment and all other forms of violence against women and targeting intellectuals in the communities, because of this conference, fighting among women at water points will diminish and we will not support any form of violence.”  She promises.

The Unity state minister of gender child and social welfare Rose Nyaboth Toch who also adorned  this conference while delivering her statement said her ministry is focused on eliminating gender-based violence such as rape  and forced marriage against women and girls yet giving special courtesy to physical violence.