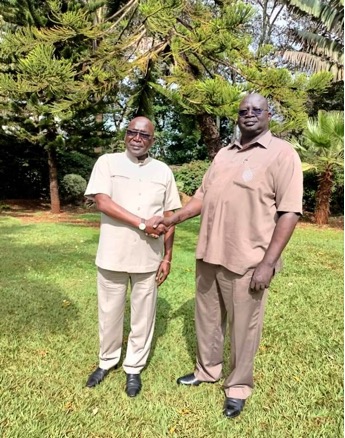 Buay has been in Juba following his release in 2019 before he confirmed his defection on May 3, 2021 while at Kenyan’s Capital Nairobi.

“This is to inform all the people of South Sudan that on 3rd May 2021, I have joined the South Sudan United Front/Army (SSUF/A) under the leadership of General Paul Malong Awan,” he declared in a statement seen by Juba Echo on Tuesday.

In 2018, Buay was arrested but later charged with treason, rebellion, offenses during operations, disobedience of lawful orders and violations of standing orders, according to articles 61, 67 and 69 of the SPLA Act, 2009 during a court martial on April 2019.

However, during the verdict by then, he was stripped of ranks, dismissed from the national army and sentenced to a year in jail.

He was later set free by the Office of the President on November 2019, after serving few months in the prison.

Despite President Kiir’s Pardon for Buay, the former military leader has come out to accuse the government of poor leadership; a reason he claimed resulted to his defection.

“It is because of the following reasons; barbaric attack on the cattle camp of the spiritual leader in Mayom County of Unity State on May 3, 2021, presence of the National Congress Party in the government and the SSPDF soldiers treatment,” he alleged in a statement.

“The President Kiir and his government have failed to take care of the welfare of our gallant forces. The SSPDF faces a lot of challenges including problems related to logistics, and sustainability, lack of mobility, lack of new equipment, lack of competent command and control, and lack of salary,” Buay added.

It is not clear whether Buay meant the latest corruption exposed by the Auditor General or the preexisting one.

The former military who originates from Unity State claimed he would challenge President Kiir regime with his new alliance for country to realize peace and stability.

When contacted for comment, Michael Makuei Lueth, the Government spokesperson said that Buay has all the entitlements to make his decisions.

“Well, it is his right. He has every right to decide where to go. So if he has decided to join whoever he likes, then it is up to him, we have no much to do with him,” he said in an interview with to Juba Echo on Tuesday afternoon.

General Stephen was captured by Special Forces commanded by Gen. Mathew Puljang in Mayom, in May 2018.

He was the Commander of 5th Infantry Division of the SSPDF based in Wau, Western Bahr El Ghazal State.