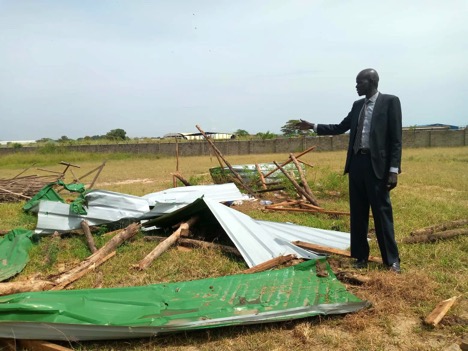 Residents of Highway residential area in Juba woke up on Saturday morning to sound of noisy excavators demolishing their houses.

The hasty eviction on the watch of Rejaf Payam administrators left two people wounded and 34 houses razed to the ground.

“The incident took place on Saturday at around 11 A.M, it took place at a place called Gombo Highland and it targeted members of Aliab Community of Awerial County,” Anok told The Juba Echo on Monday during his visit to Highland.

Anok said the demolition exercise was done under the directive of Rejaf County Administrator Sarafiro Lodo.

“Rejaf County Administrator Sarafiro Lodo ordered the soldiers to go to Highland to demolish all the buildings. The soldiers went drunk and they were definitely bribed,” he said.

Manyang Ajak, a local trader alleged that 3.5 million South Sudanese Pounds was looted by security forces during the eviction.

“We are traders, we left our money at home and soldiers looted it during the forceful eviction. The money belongs to many traders,” said Ajak.

Charles Wani, Sub-Chief of Rejaf Payam, said the residents of Highland were not informed about the eviction.

“Even if there was a directive for eviction, you can’t just come and start demolishing houses without notifying the residents of the area,” said Wani.

“I am appealing to Rejaf County Payam administration to allocate alternative areas to settle those who have been  evicted until their problems are solved,” Wani added.