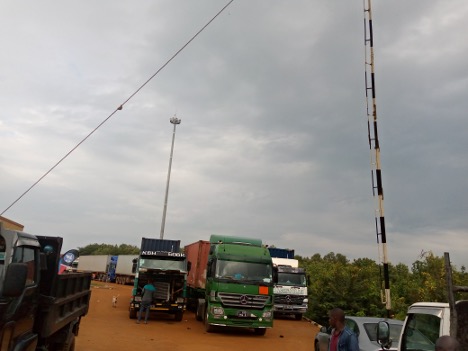 Truck drivers from Uganda have criticized the introduction of electronic system for goods clearance saying it is too slow and responsible for the truck backlog witnessed at Nimule border point for some days now.

The criticism of the truck drivers surfaced following the commencement of electronic vehicle registration and control system to enhance security at the border by ministry of interior on Monday.

A section of truck drivers say, that the electronic system is new to many clearing agents who have not mastered it and the poor network does not warrant quick clearance of goods.

One of the Truck drivers, Khalid Abdhalleman, says the poor network stalled clearance of vehicles for hours adding that the trucks have started moving only after the return of the internet.

“The vehicles have now started moving having been stuck for three days and it was due to poor network. The network has been rectified and things are moving normally.” He remarked.

When I asked how the clearing agents were coping with the new system, they said those who are computer illiterate are facing challenges but will soon learn.

When asked Nimule town clerk, Edward Akile, confirmed that the new system slowed down clearing proceedings at the border.

“The movement of vehicles now cannot be compared to the past because in the past was done manually but now there is the introduction of a new system which delays the process. Electronic payment is the one working now which reduces movement but things are difficult if we do not have the experts,” he testified. Akile however, noted that, the swiftness of clearance will improve as the staff adapts to the new system