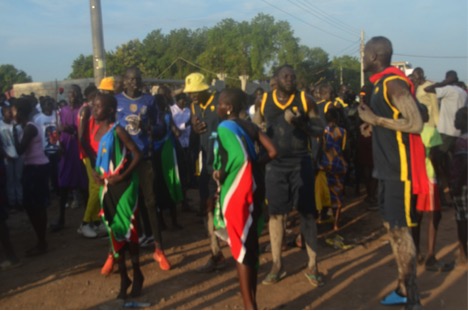 Many Dinka youth are finding utmost affection in their cultural dergel dance in South Sudan to retrace their traditional roots long abandoned during post-independence phase.

They view the tradition as alternative to European culture that has supplanted the values of their ancestors.

Kau Marial Buong and Magut Thon are some of the energetic youth that are working hard to participate and promote the Dinka dergel dance among their peers.

The duo shared their experiences with The Juba Echo  Thursday last week in Juba, during the traditional dance performances attended by foreign diplomats and officials from the South Sudan government.

For his part, Buong said many young people from the Dinka ethnicity are now nostalgic and are in urgent need of reconnecting to their cultural roots to promote peace and unity following years of conflicts and intermittent sub-national violence that ripped apart once peaceful communities.

“Our young people are participating in this cultural dance for the sake of peace and unity,” Buong said.

Buong is now retired from coaching basketball to training youth from his community in cultural dance and wrestling.

The current transitional unity government in South Sudan is keen to mend the shattered social fabric since outbreak of conflict in December 2013, through encouraging inter-cultural activities such as traditional dance, wrestling and sports competitions.

“Culture is our identity as South Sudanese as well as Dinka ethnicity, and nobody has a right to dismantle or replace our own culture,” Mackle Majok, cultural dance team leader said.

Majok cited the dark days of colonial era where Arabs from northern Sudan imposed their Islamic norms and cultures on Southerners.

He also lashed out at the British colonialists for introducing traditional marks on the faces of some ethnic groups for easy identification.

These traditional marks have since been used by rival communities to segregate and fight each other over local resources.

Chol Deng alias Messi, said he always attends the traditional dance ceremony every Thursday, in order to reconnect and share social ideas with his age mates between 10 and 12 years.

“I am very delighted to practice our cultural dance with my agemates, I am 10 years old and my friends here are exercising together to become good dancers in future,” he said.

“Yes, I love cultural dance as well as football because I am a die-hard fan for Lionel Messi. I love both hobbies and I cannot leave one at the expense of the other. I will continue to enjoy the two and there is enough energy for me to balance them,” Chol said.

Ding Manyang, another teenager aspiring to be the best traditional dancer urged her age mates to join dancing competition every week to learn more styles.

“I call upon my age mates to join us every week for dance practicing so that we sharpen our skills in dergel dancing style and I really love it,” she said.

The Dinka community from Jonglei, Lakes State and Mundari of Central Equatoria state have continued with the tradition of organizing traditional dances and wrestling competitions to preserve their culture.