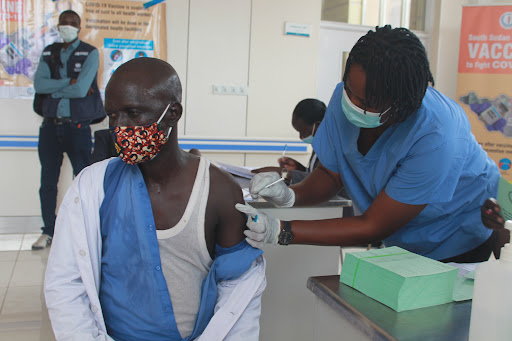 The tales from China and Europe were harrowing with tens of thousands, and later hundreds of thousands of deaths on a daily basis.

Without treatment, the World Health Organization was forced to announce a global pandemic.

Countries joined health organizations in seeking for a remedy to the virus, and vaccines became a tall order.

On April 5th 2020, the first case was diagnosed in South Sudan and subsequently setting in measures which paralyzed public gatherings, limited movements and closing schools and churches as well as suspending sporting activities.

“The arrival of COVID 19 vaccines in South Sudan is a God sent manna to rescue his people from suffering, otherwise some of us would have either died of frustration or starvation,” Hanifa Gune, a 29-year-old business woman in Juba told Juba Echo in an interview.

The vaccines first arrived in the country in April this year, 132,000 shots of AstraZeneca, under the COVAX facility.

People were first hesitant but slowly embraced the exercise of vaccination.

About 60,000 were vaccinated before the vaccines could expire in August and 71,000 returned to the COVAX facility.

By the end of August, South Sudan again received 59,000 doses of the AstraZeneca and 152,000 of the Johnson and Johnson single shot vaccine.

By the second week of September, South Sudan had COVID-19 cumulative cases of 11,805.

Recoveries are 11,195 and deaths have been 121 since April last year when the first case was registered.

During its height, businesses collapsed, and those which survived could only limp on.

Borders were closed and prices rose as imports were slow to arrive. Prices shot up beyond purchasing limits of the people, already hit by inflation and an economic crisis caused by conflict.

World over, governments simply focused on domestic concerns arising as a result of the COVID-19.

Overall, business slumped in volumes around the world, including in South Sudan.

With the vaccines, borders are opening and businesses resuming towards normalcy.

In South Sudan, there is a rush for the exercise with 30,000 people already being vaccinated after receiving the second batch of vaccines.

Overall, 90,000 people have taken the jab this year, a paltry figure compared to other countries but showing a sign of acceptance.

Gune is fully vaccinated but can’t forget how the virus killed her friend.

“As fate would have it, I lost my Kenyan business partner to COVID 19 early this year,” she said.

The loss of her friend left Gune devastated.

“I became devasted, frustrated, out of stock and kept running broke every passing day to a point of wondering how I will pay rent and feed my self in the days ahead,” she recalled.

Gune closed her shop amidst her problems and picked up a job at a local restaurant.

She got her inoculation in mid-July. Now with the second import of vaccines, Gune is fully vaccinated.

“Now I even had the guts to fly to Nairobi, get my stuffs and fly back to Juba after 2 days to re-start my dead business,” Gune said.

“I haven’t felt any side effect,” she said.

“I am a living example of vaccine safety and for those hesitant ones, I want to remind them that they will pay a heavy price including death.”