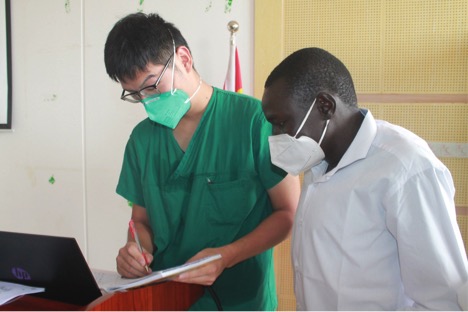 Li Jinkuan, a Chinese language instructor with the eighth batch of the Chinese medical team is relishing every opportunity to teach South Sudanese medics Mandarin, despite knowing that the language is new to his students.

He has been training about 45 medics since May, that include medical doctors, nurses and laboratory technicians in the youngest nation who despite challenges appear dedicated to learning Chinese language.

Li teaches phonetics and language twice a week at the Juba Teaching Hospital in a large conference room where he can be heard aloud spelling out Chinese language characters to his students.

“I teach phonetics and language so far these doctors and nurses attend classes on time and they have strong interest in learning Chinese language and culture. I think they are progressing well in learning the language and knowing more about China,” he told The Juba Echo in Juba on Wednesday.

Li who is fluent in English language admitted that patience is his biggest virtue that has allowed his first time students to grasp some basic Chinese characters.

“Everyone here is learning the language for the first time, so it is a little bit difficult for them to pronounce some characters but with patience we will solve the problem together. I think they have the capability to overcome these challenges,” he disclosed.

Li a native of Anhui Province, said he expects positive results at the end of the first semester in August, before his students resume lessons for the second semester in September.

Wilma Rahma David Ali, laboratory technician at Juba Teaching Hospital who is attending medical Chinese language course said she is learning the language for the first time and has grasped some characters.

“In the beginning most of us did not know how to pronounce Chinese language characters but he (Li) is always trying to coach us, so now we are trying and we hope to complete the course,” said Ali.

“It is good to learn somebody’s language to ease communication because in future you might go to other countries and fail to communicate,” she added.