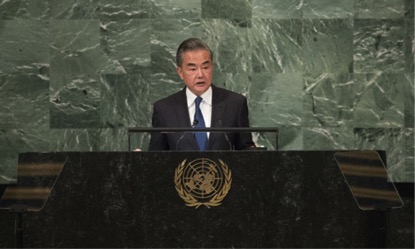 China’s voice at UNGA ‘brings confidence to world in turbulence’

By Yang Sheng and Zhang Changyue

Despite the world being in a phase of “turbulence and transformation,” we have reasons for hope amid broadening cooperation and deepening economic globalization, Chinese State Councilor and Foreign Minister Wang Yi said at the general debate of the 77th session of the UN General Assembly (UNGA).

Compared to the speech delivered by US President Joe Biden at the same event on Wednesday, experts said China’s voice brings confidence for peace and development, especially to developing countries that face serious challenges amid multiple crises, while the voice from the US makes the world nervous and anxious, as the only superpower of the world is trying to use ongoing conflicts and tensions worldwide to save its declining hegemony.

Wang delivered a speech themed “Making Every Effort for Peace and Development, and Shouldering the Responsibility for Solidarity and Progress” to elaborate China’s position on global issues on Saturday.

On the Russia-Ukraine crisis, Wang reaffirmed China’s stance for peace, with analysts saying that when the US is forcing countries to take sides, and adding fuel to the flames by increasing weapon supplies and indirect military intervention to keep the conflict from ending, China’s courage to keep a neutral stance for peace is not easy in front of US pressure, but it is the right position to uphold as both Moscow and Kiev respect China’s stance despite noises from some Western countries.

On the sidelines of the general debate of the UNGA, the Chinese state councilor and foreign minister held many bilateral and multilateral meetings with top diplomats and senior officials from other countries and the UN. China seized the chance to reaffirm China’s firm stance on the Taiwan question and its unshakable determination for reunification to the international community, and it clearly told the world who should be held accountable for the intensifying situation in the Taiwan Straits.

Wang also met with US Secretary of State Antony Blinken, which shows that although the US is damaging bilateral ties with dangerous provocations on the Taiwan question, China still leaves the door for communication open, said experts, noting that the US always says it is not seeking conflict or a new Cold War with China, and stresses its “one-China policy” remains unchanged, but its actions to embolden and arm the Taiwan secessionist authorities make Washington increasingly untrustworthy.

Wang introduced China’s five roles as China has always been: a builder of world peace, a contributor to global development, a defender of the international order, a provider of public goods and a mediator of hotspot issues.

When most major world powers are involved in military conflicts, are hyping bloc-to-bloc confrontation and are keen to use sanctions rather than communication to handle crises and divergences, it is truly important that at least one of them, China, keeps upholding the faith for peace and development, and is able to help the majority of the international community – the developing countries – to overcome the unprecedented challenges caused by the pandemic and geopolitical conflicts, as well as Western sanctions that have disrupted global supply chains, experts noted.

China is a true builder of world peace, with concrete and convincing actions, said a Beijing-based expert on international relations who asked for anonymity, noting that from the Russia-Ukraine conflict to the Korean Peninsula nuclear issue; from the Iranian nuclear deal to Palestine-Israel issue, China has never added fuel to the flames as the US always does with its military industrial complex raking in huge profit.

As a mediator of hotspot issues, China’s stance on the Russia-Ukraine conflict has won respect and understanding from both Moscow and Kiev despite the West’s  hypercritical attitude, said Lü Xiang, an expert on international relations and a research fellow at the Chinese Academy of Social Sciences.

Ukrainian Foreign Minister Dmytro Kuleba said at the meeting with Wang on the sidelines of the UNGA in New York Thursday that Ukraine attaches importance to the international status and important influence of China, and expects the Chinese side to play an important role in alleviating the current crisis.

On Wednesday, at the meeting with the Chinese state councilor and foreign minister on the sidelines of the UNGA in New York, Russian Foreign Minister Sergey Lavrov also said that “Russia is still willing to solve problems through dialogue and negotiation.”

“Neutrality is not an easy position to hold and it’s also an attitude that is difficult to tell, especially in a situation with huge complexity, but we can see the foreign ministers from both Russia and Ukraine welcome China’s stance, and this proves that China’ s neutrality is correct. We don’t need to explain too much about our neutral position to the hypercritical Western countries. And we also don’t need to explain anything about our strategic ties with Russia,” Lü said.

Wu Xinbo, dean of the Institute of International Studies at Fudan University, echoed that China’s stance is clear, and the reason why the US and some Western countries blame China for being vague is that “China refuses to say what they want to hear,” and China will never follow the Western biased and problematic stance.

After Wang’s speech at the UNGA on Saturday, many representatives, officials and diplomats from all around the globe gathered outside the assembly hall to shake hands with the Chinese delegates and expressed their support for the China-proposed initiatives, according to media reports.

This shows that China’s stance and initiatives are broadly welcomed by the vast majority of the international community, said experts. According to the website of the Chinese Foreign Ministry, Wang has on his schedule 38 bilateral meetings with diplomats and senior officials from other countries and international organizations, as well as the UN, during his trip.

Lü said “the world is facing multiple challenges including the economic downturn, the pandemic and the energy crisis. Every nation is feeling the pressure. The EU’s economy is suffering from the Ukraine crisis and it’s also deeply impacted by the US, while the US economy is also in trouble with many observers believing that the US’ economic performance in the third quarter could be even worse than the first and second ones.”

In general, the resilience of China’s economy is better than other major economies, and this is why many developing countries want to talk to China, because they believe in China’s development and trust China’s firm stance to speak for the developing world, said experts.

China’s attitude to promote cooperation among developing countries has brought strong confidence to a turbulent world, especially when developed economies ignore the demands from the developing world as they are unable to clean up their own mess, analysts noted.

China is an active participant in global governance and South-South cooperation, Wang said in his speech. “It set up the China-UN Peace and Development Trust Fund and the Global Development and South-South Cooperation Fund. It has provided development aid to more than 160 countries in need and extended more debt-service payments owed by developing countries than any other G20 member state.”

As the Taiwan question becomes the most dangerous factor that could bring tension and even military conflict in the region due to a series of provocative actions by the US in recent years, it is likely to make relations between the two most powerful countries break. In his trip to the UN, Wang reaffirmed China’s firm stance on the matter and warned troublemakers to stop their risky moves.

“China will continue to endeavor to achieve peaceful reunification with the greatest sincerity and greatest efforts. To realize this goal, we must combat ‘Taiwan independence’ separatist activities with the firmest resolve and take the most forceful steps to repulse interference by external groups,” Wang said in his speech.

“Only by resolutely forestalling in accordance with the law separatist activities can we forge a true foundation for peaceful reunification. Only when China is completely reunified can there be enduring peace across the Taiwan Strait. Any scheme to interfere in China’s internal affairs is bound to meet the strong opposition of all us Chinese, and any move to obstruct China’s cause of reunification is bound to be crushed by the wheels of history,” Wang remarked.

Xin Qiang, deputy director of the Center for American Studies at Fudan University, told the Global Times on Sunday that “there is a realistic urgency for China to reaffirm its stance on the Taiwan question to the whole world as the question has increasingly become a trigger for confrontation and even conflicts between China and the US.”

“The stage of the UN General Assembly is a very appropriate place for China to reiterate the legitimacy and rationality of UN Resolution 2758, as the US is trying to undermine the resolution and together with some of its followers like Lithuania, Japan and Australia, the US is trying to internationalize China’s internal affairs and make serious damage to China’s core interests and sovereignty,” Xin noted.”

Wu said although Biden and Blinken always say the US’ “one-China policy” remained unchanged, and the US does not support “Taiwan Independence,” the fact is that the US is increasing official exchanges with the secessionist authorities on the island and arming the military forces on the island to resist reunification.

“Before the provocative trip by House Speaker Nancy Pelosi, the Chinese top leader told the US president about the seriousness of the Taiwan question, and Biden repeated the nice words, but eventually we saw the White House made no effort to stop the crisis or fulfill the US president’s promise,” Wu noted.

Therefore there is a challenge for the US side – it needs to save its terrible credibility by taking action, and then it would be possible to fix China-US ties and restore cooperation, as currently, in China’s mind, the Biden administration is untrustworthy, and China does not want to waste time on useless promises from Washington, experts said.