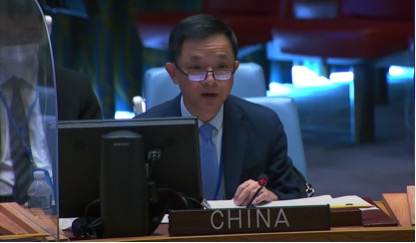 China: UN Security Council should lift as soon as possible the arms embargo on South Sudan

——Full text of the Remarks by Amb. Dai Bing, Chinese deputy permanent representative to UN, at the UN Security Council Briefing on UNMISS

China thanks Special Representative Haysom and OCHA Director Mudawi for their briefings, and welcomes the presence of the representative of South Sudan at this meeting. I have listened attentively to the statement by Ms. Merekaje Lorna Nanjia.

We are pleased to see the continued progress in the implementation of the revitalized agreement. On April 3, the parties in South Sudan reached an agreement on transitional security arrangements. President Kiir set up the command structure of the Necessary Unified Force. South Sudan has also completed the formation of the reconstituted transitional national legislative assembly, launched the process for establishing the commission for truth, reconciliation, and healing, and tabled the constitution-making process bill. China welcomes these important developments, and appreciates the mediation efforts of the UN, the AU, IGAD, and relevant countries in the region, Sudan in particular.

The transitional period in South Sudan will end next year. It is hoped that all parties in South Sudan will sustain the current positive momentum, and move in a steady and orderly manner to achieve the objectives set out for their transitional political structure, security arrangements, and economic reform. With regard to the unique challenges facing the country in implementing the revitalized agreement, the international community should maintain the necessary patience, and help the country overcome practical difficulties rather than keep exerting excessive pressure, criticizing, and imposing sanctions. It should be pointed out that election, as an important part of the political transition, cannot resolve all the issues. The key lies in all parties in South Sudan achieving reconciliation, and reaching consensus on various agendas for advancing the political transition in a concerted effort to promote national stability and development.

The overall security situation in South Sudan has been stable recently. Yet inter-factional and inter-communal conflicts have occurred from time to time, which calls for a tailored and integrated approach. It is necessary to fast-track the implementation of transitional security arrangements and the formation of Necessary Unified Force. The international community should provide sufficient financial and material support for these efforts. The Council should respond to the AU’s appeal by lifting as soon as possible the arms embargo on South Sudan. The US keeps piling up unilateral sanctions on other countries, inflicting tremendous harm on the people of those countries. Sanctions should not be instrumentalized for political ends. Double standard should be abandoned. An increasing number of Council members does not support the current sanction regime on South Sudan.

The inter-communal conflicts in South Sudan have a long history, and should be addressed by multiple means such as prevention, mediation, dialogue, and development. The Secretary-General’s report pointed out that these conflicts mainly stemmed from resource competition. The international community should help South Sudan grow its economy, improve people’s livelihood, and eliminate the root causes of conflicts.

South Sudan’s economic reform achieved certain results. Its macro economic situation remains relatively stable. That said, the humanitarian resources shortfall remains large and food insecurity acute, affecting an estimated 7.7 million South Sudanese this year. We call on the international community to maintain and increase aid to South Sudan, and maintain and scale up contributions to UN humanitarian and development agencies. At the same time, the international community should also focus on helping South Sudan strengthen its own development and capacity building, fully respect its ownership in economic development, unleash its potential in agriculture, energy, infrastructure, and other fields, and help the people of South Sudan achieve self reliance at an early date.

China always stands with the people of South Sudan. A number of major Chinese-aid projects, such as Wau Jul River Bridge, Juba Teaching Hospital, radio and television facilities, have been underway or have completed one after another. China has also provided emergency food aid to South Sudan, sent medical expert teams, provided anti-pandemic supplies and equipment, and worked with UNMISS in Eastern Equatoria on pilot projects for youth and women’s capacity building in ecological agriculture, helping South Sudan in economic recovery and improving people’s livelihood.

UNMISS has done tremendous work to help implement the revitalized agreement, and protect civilians. China supports UNMISS and the Government of South Sudan in stepping over coordination and communication, and a calls for the alignment of the mandate of UNMISS with the national priority strategies of South Sudan, so as to form synergy. The safety and security of UNMISS peacekeepers is an important foundation for the Mission’s effective mandate delivering. All parties concerned that should take practical measures to contribute to the safety and security of the peacekeepers and better peacekeeping performance.