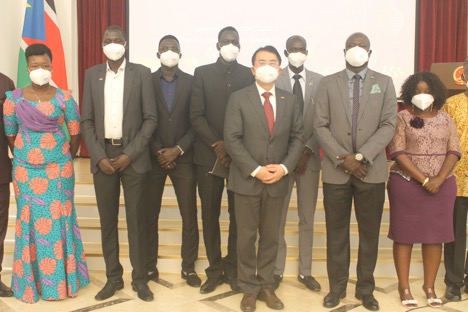 China and South Sudan have launched their first -ever alumni association to foster good relations between the two countries.

Simon Juach Deng, Director of the Department of China Affairs in the Ministry of Foreign Affairs during the ceremony on Sunday in Juba, said that the South Sudan China Alumni Association (SSCAA) is a culmination of strong relations built prior to South Sudan’s independence from Sudan in 2011.

He disclosed that the Chinese government has been supportive to South Sudan in establishing critical institutions and infrastructure critical for development in the youngest nation.

Deng urged the more than 200 members of SSCA to apply the knowledge and skills acquired from their studies in various Chinese universities in order to benefit South Sudan.

Hua Ning, Chinese Ambassador to South Sudan said the relations between the two countries will be deepened through the newly established students association.

“Our relationship has entered a new stage of development and ushered in a brighter development prospect. At this important moment, we are honored to witness the inauguration ceremony of the China-South Sudan Alumni Association,” said Hua

“I firmly believe that this new cooperation platform will deepen and inject greater vitality into the exchanges between the two peoples,” he added.

“All of you here are witnesses, participants, and builders of the vigorous China-South Sudan relations. The continuous deepening of our bilateral relations will provide more opportunities for the personal development of students who study in China,” said Hua.

Itoo Emmanuela, who benefited from the Chinese government scholarship in 2013 to study for oil and gas storage and transportation, said the skills she acquired from China University of Petroleum In Beijing have helped her train colleagues she works with in the oil fields.

“We do train our staff who are working in the oil fields, we do provide them with environmental awareness and management,” Emmanuela who works with South Sudan petroleum pipelines.

She expressed her optimism about the SSCAA, adding that it will bring together various South Sudanese who studied in China to share ideas and knowledge in order to support their country’s development.