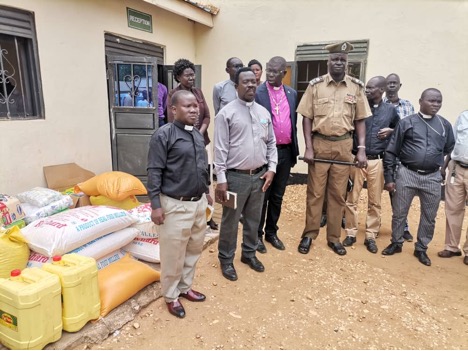 The Acting Director of Juba Central Prison has called on Judiciary to expedite backlogs trial for inmates confined at the Prison to reduce crowding given the limited space.

Maj. Gen. Baak Anyar Longar admitted that there are suspects who have overstayed in the custody without trial, thus it was high time to produce them before the court of law.

“Justice has to play its role by expediting hearing of those cases and quickly pass the verdict. Those convicted can still remain in Prison but those with minor cases can be released to reduce crowding,” he said.

The Police Official was speaking to the press after receiving donations of food aid from Christian Church United at the Prison’s premises in Juba on Wednesday.

Maj. Gen Longar urged the civil population not to forget those in Prison, adding that they need legal assistance as well as food assistances to improve their health conditions.

“Juba Central Prison was established during the British rule to accommodate 500 prisoners but under current conditions, the Central Prison now has 1,765 prisoners. The number changes, it reduce when there are prisoners release and it increases when new convicts come in,” he explained.

Alemin Bob, the Chairperson of Pastors’ Network said the organization would continue to work closely with the authorities to improve inmates’ condition at the Central Prison.

“We will stand in solidarity with our brothers and sisters in prison; we will work hand in hand with the government. We have many challenges but we need to change the situation,” he stated.

According to Bob, lack of peace and stability has been contributing to the crimes rate in Juba, citing the network will work hard to increase efforts of ending crimes among the people.

In April earlier, inmates at the Central Prison complained of food shortage after spending two days without food.

But the management had said it was due to the fact that the supplier didn’t supply food to inmates.

The reason behind the supplier’s reluctance to have supplier food is yet to be known.