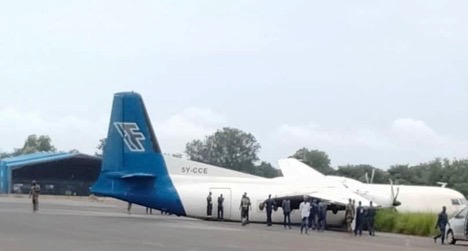 Three crew members have escaped unhurt after a Folker 27-50 plane skidded off the
runway at Juba International Airport on Friday.
The Director of Juba International Airport Kur Kuol confirmed to Juba Echo that the
plane carrying logistic supplies was en-route to Malakal and Maban Counties of Upper Nile
State and was expected to return to Juba on Friday..
He said the plane that was chartered by Sco Company to take food commodities to Malakal and
Maban.
“That is true the plane crushed this morning, there was no casualties, there were 3 crew members 2
pilots and one engineer, its 27-50 plane taking up from Juba going to malakal and Maban, it was just a
cargo carter by Sco taking their food commodities to Malakal and Maban and back to Juba and company
that have plane is called Icon, it has crushed and didn’t burn” he said.
He further said the plane didn’t burn and the commodities were not destroyed as well.