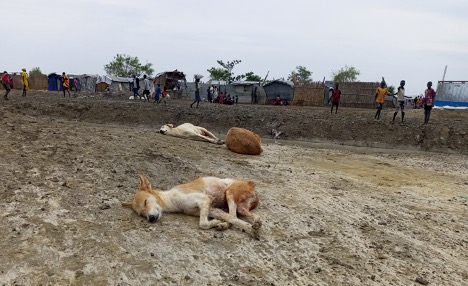 Residents of Bentiu IDPs camp in Unity State are living in shock after six of their members were bitten by a stray dog in Sector Four on Monday alone.

One of the victim a 30 year old woman Mrs. Nyabiey Both Makew told Juba Echo that the dog bit her on her way to the market using Bentiu IDPs camp main road.

“That dog had bitten five people before it pounced on me, I later realized that it was wild,” Nyabiey told Juba Echo during an interview.

Nyabiey added that she was immediately taken to MSF Hospital for medication because she was so afraid of getting rabies out of the dog bite.

“I have received an injection from MSF Hospital and feeling healthy for now, but I don’t know what will happen after some days, the dog was killed by young boys because it was running up and down in the camp.” Mrs. Nyabiey revealed.

The chairperson of Unity State IDPs camp Mr. John Nhial Ruai directed all the people rearing dogs  to keep their dogs  away from Bentiu IDPs camp to curtail the  rampant cases of  dog bites in the settlement.

The camp chairman also ordered young boys to put out of action all the stray dogs which have so far bitten more than 23 people this year alone in Bentiu IDPs camp in order to mitigate dog attacks on human beings.

“The only way to prevent more dog bites is to expel all dogs out of Bentiu IDPs camp because they are not only biting people but also domestic animals.” Mr. Ruai suggested.

The number of dogs in Bentiu IDPs camp reportedly grew big due to floods in which many villages were displaced to various camps including Bentiu.