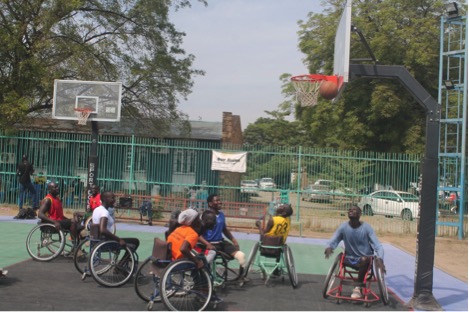 South Sudan is hoping to use the upcoming wheelchair basketball tournament in neighboring Democratic Republic of Congo (DRC) to open up new horizons for persons living with disabilities.

Martha Achudi Manyang, the youngest member of the 12-member team set to represent South Sudan, said on Thursday as the team prepared to leave for Kinshasa that they are ready to compete to gauge themselves against rival teams in the region.

“We are now going to play at the regional tournament for the first time, for sure when we reach there safely we are definitely going to win, we will face them and we will not fear them even if they are bigger,” said 16-year-old Manyang in Juba, the capital of South Sudan.

Manyang started playing wheelchair basketball in 2020 and this tournament presents her the first opportunity to travel outside South Sudan where they will face Niger and DRC.

“We are determined to win despite this being our first tournament outside the country,” she said.

The Wheelchair basketball tournament starting on December 5th till 10th is organized by the International Committee of the Red Cross (ICRC) and the Congolese Paralympic Committee to mark international day of persons with disabilities.

International day of persons with disabilities (IDPD) is a UN day that is celebrated every year on 3 December.

Peter Makom Dut, a 39-year-old member of the team said that playing wheelchair basketball has inspired thousands of persons with disability and also helped to refocus attention on their rights in the country.

“We have been preparing for the last two months and now we are ready to play with our counterparts in Democratic Republic of Congo, our team will not hesitate to play at the regional level,” he said.

Yunis John, 24- years- old said the tournament presents rare platform for him and other teammates to showcase talent and potential on a bigger stage.

“We have been seeing wheelchair basketball being played live in other parts of the world, and now we have interest to try it ourselves by playing with people across the borders,” said John.

According to NGO Light for the World, there are currently 1.2 million people living with disabilities in South Sudan, around a fifth of whom have impairments that have been caused by violence.

“My expectation is that we are going to bring the cup home, we are not going for fun they have talent and ability, It is a good move for South Sudan to have  wheelchair basketball and we are very hopeful that there will be something good from the competition,” said Jokino.

“We are doing it in line with our objectives of social inclusion; we need to integrate persons with disability into the society that means the person with disability should participate either playing, decision-making or employment,” he added.

“Our players will do something good for the country and also I call on other stake-holders to render support for wheelchair basketball,” said Lowate.