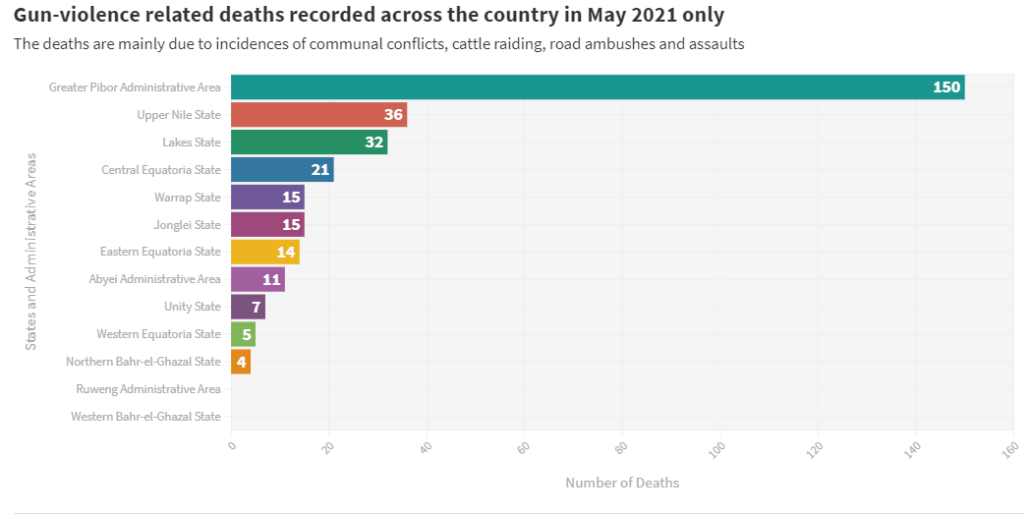 Gun-Violence leaves 310 Killed across South Sudan in May

Numerous gun-related incidents across South Sudan have left at least 310 civilians killed in the month of May alone.

Last month, 211 Check documented reports of deaths across all the ten states and three administrative areas as published by mainstream media houses renowned for reporting on crime.

According to data drawn from Radio Tamazuj and Eye Radio, Greater Pibor Administrative Area took the lead of areas with the highest number of deaths occurrences. The area registered 150 cases in May alone.

Pibor is followed by the Upper Nile and Lakes States which recorded 36 and 32 deaths respectively.

Central Equator registered 32 deaths, while Jonglei and Lakes states both recorded 30 deaths altogether. The three States were followed by Eastern Equatoria State and Abyei Administrative Area, with 14 and 11 deaths reported.

Credit to Western Bahr-el-Ghazal State and Ruweng Administrative Area zones that did not notice deaths due to attacks. However, it needs to be known that the two areas registered several deaths in the month of April this year.

According to the above death related stories where local authorities were mainly quoted, these killings were mainly as result of inter and intra communal fighting, cattle raiding, road attacks and other forms of gun related assaults.

NOTE: This data doesn’t fully bear the actual or complete number of killings across the country, it only bears data reported by the two prominent media houses [Radio Tamazuj and Eye Radio]. There might be several other deaths recorded by various media houses or those not even reported.