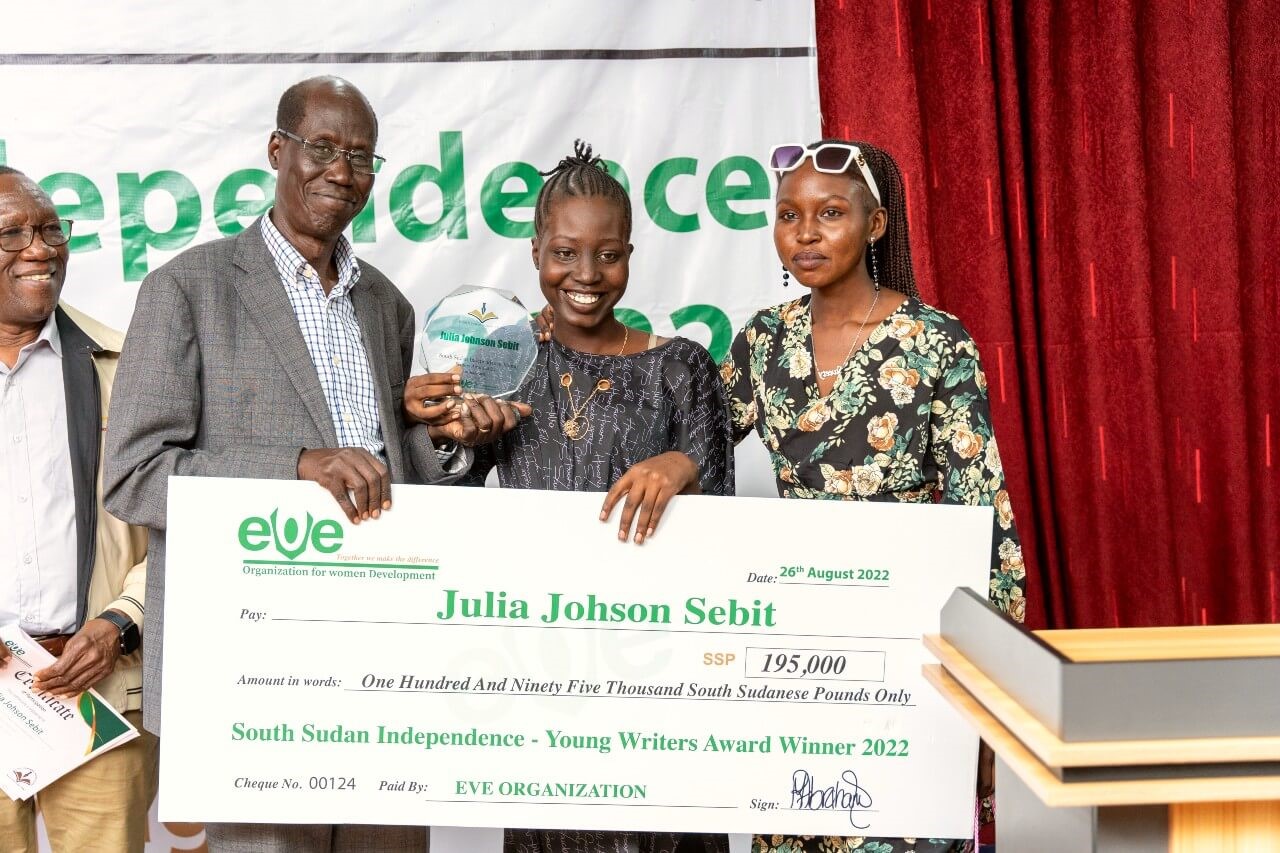 Julia Johnson Sebit have been crowned winner of the 2022 independence young writers awards having defeated her peers with her emotional and educative article entitled “The Orphan Girl.”

She was conferred a trophy, a cheque of SSP195,000, a certificate, bag of branded corporate and scholastic materials by Eve Organization who organized and fully funded this highly contested award.

Julia was trailed by Bibiana Maker and Deng Joseph, who shared the second spot and each was given SSP130, 000, a certificate, and a bag of corporate presents.

Ngong Abraham gabbed the third spot seizing SSP 97500, a certificate, corporate items, and scholastic materials from Eve Organization which also awarded other participants for their submissions.

The committee that rated the writers against their work included Professor Pauline Riak, the Deputy Vice Chancellor of Rumbek University, Mr Gabriel Shadar of UNMISS radio Miraya and Ustaz Dominic Kango – a communication specialist and a lecturer at the University of Juba.

The Independence Young Writers Awards is the Eve Organization’s annual initiative that appreciates the autonomous status of South Sudan by promoting literacy among young people.

Speaking at the event held under the theme “There is no greater agony than bearing an untold story inside you”, Eve Organization’s Executive Director Rita Martin Lopidia, said the award program is a component of Eve Organization’s flagship program – the Young Women leadership program, also known as The – Incubator.

The program, she said, is inspired by the founders of the organization as it fulfils its social corporate responsibility to the community.

She added that, the initiative aims at building a culture of reading and writing among young people and guiding them in their respective career paths in a world where literacy is an integral pillar of development.

“The young writer’s award is intended to encourage and recognize excellence in writing stories about South Sudan, facts or fiction. The purpose of the initiative is to promote the culture of reading and writing among youth to develop strong communication competences which is essential in any career path one wishes to pursue,” she said.

Since the inception of this initiative three years ago, about 30 educative and stimulating stories have been submitted and the organization seeks to produce books that are accessible to anyone who wants to read South Sudanese stories told from a South Sudanese perspective

She called for support from potential partners to help sustain the initiative and possibly extend it to other parts of the country.