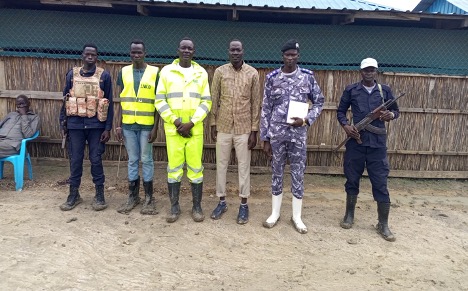 Lst Majiok Kuol, the criminal investigation department officer confirmed that they arrested the six young men on Sunday from Bentiu IDP camp at 9:00am when they were identified by the 17yr old victim.

“We have yesterday morning arrested six youths suspected to have raped a 17yr old girl in Bentiu IDP camp on August 12, 2022, at around 9:40 PM and we shall send them to Bentiu main prison unit after community high committee shelter verification is done. Kuol told Juba echo during an interview in Bentiu IDP camp joint police office.

The police authority pointed that the 17 year old girl whose name is withheld because she is a minor became subconscious due to severe rape induced pain and was admitted in MSF Holland Hospital for medical treatment.

“We shall not release them under any condition, they must face the law because when we release them, other people will do the same therefore, and the law must take its course.” Kuol revealed.

Bentiu IDP camp Chairperson John Nhial Ruai and his leadership condemned the action taken by these young men referring to it as “criminal.”

“The camp leadership condemns strongly the rape case involving six men and a 17yr old girl, and we shall perform shelter verification, their shelters will be confiscated including all assets inside the shelters and they will be responsible for treating the girl who is unconscious.” Mr. Ruai added.