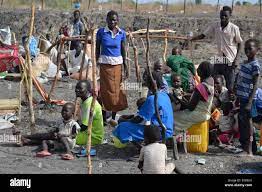 8,000 people displaced in Fashoda County due to clashes between armed groups

At least 8,000 civilians have been displaced in Fashoda County of Upper Nile State following fighting since October 6th between armed groups in the area.

The UN Office for Coordination of Humanitarian Affairs (UNOCHA) noted that renewed fighting between 6 to 9 October was reported between armed factions in several locations including Padit in Kodok Payam, Fashoda County.

“In Padit, the entire population of the village was reported displaced, and the village burnt down. Details on civilian casualties are not yet available,” it said in a statement issued on Tuesday in Juba.

It blamed suspected White Army youth for carrying out attacks in Dauth, Patoaw and Nyagara, near Lul in Fashoda Country, adding that in retaliation the ethnic Shilluks in Fashoda County and environs mobilized to defend their positions.

“As attacks advanced towards Fashoda County, the seat of the Shilluk King, tensions increase. Reports indicate that youth mobilized to protect Kodok town. As a result of the ongoing fighting, some23 people sought shelter at the UNMISS compound in Kodok,” it said.

“An estimated 8,000 people from Kodok town and other locations have moved to the UNMISS COB site for safety. A location near the airstrip was identified for people displaced by the conflict,” said UNOCHA.

It added that registration of displaced people remains pending until the situation stabilizes and humanitarian teams from Malakal can support.

“Humanitarian activities are affected, and some humanitarian personnel relocated from Fashoda County for safety reasons. Many humanitarian staff from UN system members and NGOs moved from their compounds in Kodok town to the Kodok humanitarian hub, near the UNMISS COB,” it disclosed.

UNOCHA said that many of the humanitarians who work in the area are local staff, and they risk becoming part of the affected community.

“Some local staff have already reported they are displaced with their families. Since the beginning of the conflict along the Nile River in mid-August, over 18,000 IDPs have sought shelter at the PoC in Malakal as of 11 October. As a result of the fighting, the situation between IDP population from the Shilluk and Nuer ethnic groups in the Malakal PoC site remains tense,” it said.