The United Nations has said that an estimated 9.4 million people will need humanitarian assistance and protection services in 2023.

“Something has to change in South Sudan because the number of people in need continues to rise every year and the resources continue to decrease,” she said during the release of the 2023 South Sudan Humanitarian Needs Overview (HNO) on Friday in a statement issued in Juba.

It noted that this is an increase of half a million people compared to those who were in need of similar services in 2022.

Nyanti said that the sub-national violence across the country has led to displacement, limitation of people’s access to critical humanitarian services, and livelihoods and disruption of humanitarian operations.

“The protracted displacement affects more than 2.2 million people, many of whom are unable to return to their homes for years and face major risks, including family separation and trauma,” she disclosed.

In addition, severe food insecurity will affect an estimated 8 million people, or 64 per cent of the total population, by the peak of the lean season between April and July in 2023.

It observed that in conflict- and flood-affected areas, people’s access to food and income sources is severely hampered, due to displacement to new locations, disruption of delivery of food assistance and trade flows.

“In some places, people’s daily rations have been reduced due to funding. Many of the people who are highly food insecure, are in locations with chronic vulnerabilities worsened by frequent climate-related shocks, the macro-economic crisis, conflict and insecurity and low agricultural production,” it said.

Women and girls across all affected groups remain at higher risk of attacks while moving to access humanitarian services, to attend to family needs or while carrying out routine livelihood activities, it said.

“Physical violence, rape and other forms of gender-based violence will be a reality some 2.8 million people will face in 2023,” said Nyanti.

The UN revealed that 3.7 million children, adolescents and caregivers continue to be at risk of recruitment into local armed groups and other forms of abuse, including abduction and possible trafficking, and will need life-saving child protection services in 2023.

It disclosed that on 18 November a local staff of an international non-governmental organization was shot dead during an armed attack bringing the total number of humanitarian workers killed in the line of duty since the beginning of 2022 to nine.

“As we mourn the loss of our colleague, I reiterate my call to stop attacks on civilians and humanitarians, and to provide safe access. Violence cannot be used as a means of demanding aid,” said Nyanti.

Nyanti appealed to the government for leadership in increasing investments in peace and development, because only gains in these two areas will reduce humanitarian needs.

“Pivoting to development requires a two-pronged approach of investing more in development and peace but also saving the lives of those on the brink. Peace is a prerequisite because we cannot reach those in humanitarian need or implement the development vision without peace,” she said. 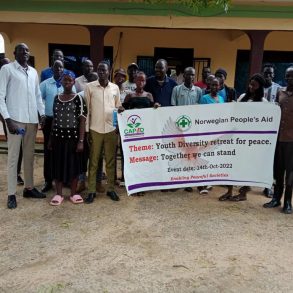