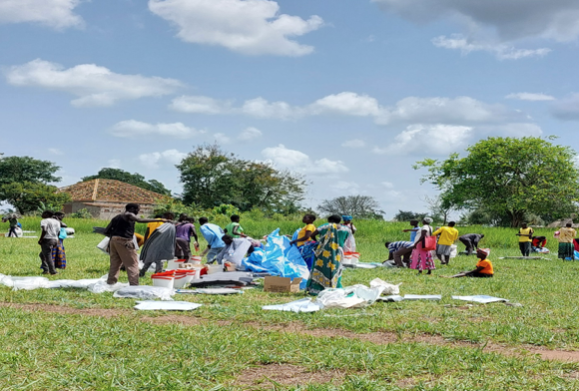 The South Sudan Red Cross donated non-food items including plastic sheets and soaps among other items to 400 households in Agoro Payam of Magwi County of Eastern Equatoria on Wednesday.

In February, the community of Agoro was affected by cattle conflict which forced them to flee the area to Magwi town.

The majority of residents have since returned home and continue with their farming activities as they embark on rebuilding their lives.

The acting director for the South Sudan Red Cross Torit field office Mr Oyet Joseph told Juba Echo in an interview that they distributed the items directly to the residents in their original homes as per the directives from the state government.

“As the policy of government says people have to go to their homes and the services are given directly to their locations, the South Sudan Red Cross went and did the special registration in Agoro last month,” he said.

“Agoro composes of three areas including Unity, Comboro and part of Dabur in Torit County and now we distributed the nonfood items to the affected 400 households,” Oyet said.

The official confirmed that the majority of those who were earlier displaced have returned to their homes to begin life afresh although he said not every home benefited from the support due to the limited resources.

“What we distributed include sleeping mats, soaps, blankets, mosquito nets, and plastic sheets. We target households, not individuals. In Agoro we witnessed many people have returned to the area and the services are not enough but of course, we target 400 households,” he said.

“The communities leaders complain because Agoro Nyolo, Agoro Maji have not benefited from this donation and they requested other partners to go and support those to locations but Agoro centre and Comboro and part of Tabur have received,” Yet explained.

According to the SSRC, the population in the area still faces inadequate water supply as many of their water points like boreholes are not functioning.

Oyet explained that “We have witnessed people are busy with their cultivation, some businesses, the centre is functioning with small shops where they can get some salt, sugar, and small things. However, the challenge they mentioned is the lack of water as many boreholes are not functioning, it is inadequate and they ask wash department to go and repair the boreholes”.

He is encouraging locals to embark on farming to cope with the situation.