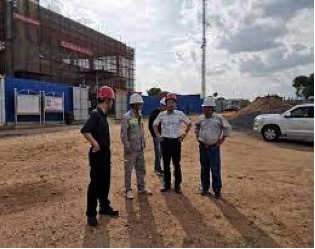 Construction Workers Fall To Their Death From Juba Tower

At least three construction workers have died after falling from a tower in South Sudan’s capital while climbing a building under construction at the country’s state owned television, the South Sudan Broadcasting Corporation (SSBC) Station on Tuesday.

Baba Medan Konyi, the Deputy Minister of Information and Communication confirmed the incident to Juba Echo in a phone interview on Tuesday afternoon.

He revealed that two people died on spot as the other one passed on from the Hospital.

“This morning (Tuesday) at 7:30 am, the Chinese Company workers working on the new studio of the SSBC fell down. The engineers fell down from the antenna something above 50 meters,” the deputy minister revealed.

“This is something which is not on the hand of the company or government. When the call of the God comes, it’s something out of the people’s hands. So as a government we send our condolences message to the deceased’s families. These people were called by God and we called them heroes because the died when delivering services to the nation,” he said

This the first time the workers fell from a roof of the tower while undertaking construction in Juba.