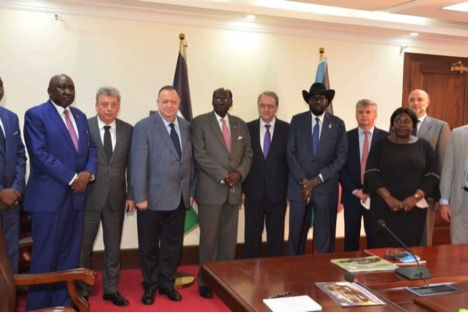 A Russian delegation led by the country’s Deputy Minister of Foreign Affairs met South Sudan’s president, Salva Kiir Mayardit on Friday in Juba to try and bolster bilateral ties between Juba and Moscow.

“The Russian Federation has stood very strongly in the Security Council in trying to oppose the arms embargo and sanctions on the Republic of South Sudan, So our president was very thankful for the stand and the great support this country got from the Russian Federation.”

The Deputy Minister of Foreign Affairs of the Russian Federation and Presidential Special Envoy for the Middle East and Africa, Mikhail Bogdanov said,

“We discussed the possibilities of boosting our cooperation in different fields of economic interests, including intensifying political dialogue and cooperation in the Security Council and the General Assembly of the United Nations to ordinate our positions in very important international and African issues,” he said.

Bogdanov revealed that, his country often count on the assessment of security situation through their friends in Juba and he pledged finding solutions to problems in South Sudan

“We always count on the assessment of our friends in Juba about the ways of solving the problems in this continent. We always support and encourage our African friends to discuss and find the proper solutions to the disputes and conflicts,” he added.

Currently, the UN Security Council has a standing arms embargo on South Sudan which Russia opposes.

The government of South Sudan has on multiple occasions called for the lifting of the arms embargo, arguing that it impedes the graduation of soldiers being trained per the revitalized peace agreement.

But the United States, the main proponent of the arms embargo maintains that South Sudan does not need more arms since there is a lot in the hands of civilians.