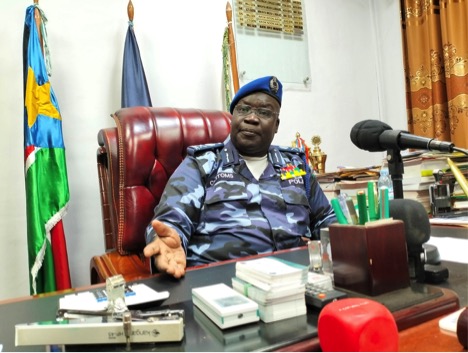 Maj.Gen Akol Ayii Madut, the Commissioner of Custom division of the National Revenue Authority has said truck drivers have delayed to pay million of South Sudanese Pounds to South Sudan’s government after being allowed into the country without paying taxes on a promise that they would later pay.

“Tax evasion has been happening now for the last two years, most of the companies that are importing fuel products are not paying their full duties, they used to be given time to proceed to Juba and pay their taxes later in the banks,” Madut told journalists in Juba.

Maj Gen, Akol said that have listed 63 fuel companies that evaded taxes through this procedure.

“There will be no more trucks allowed from Nimule to Juba without paying taxes, you have to pay your money either by bank cheque or authenticated   cheque that show that your bank account have some money,” Madut disclosed.

Madut said they are ready crosscheck with banks to recover their money from these indicted companies.

He revealed that they realized from banks that these companies had not paid the money owed to the tax authorities.

“We cannot continue losing money it’s better for me to come up with measures, if you don’t have money your truck will not come to Juba,” Madut said.

He said that the onus is on the custom division to account for the money lost under such schemes.

“We were not aware that those companies are giving us fake cheques, it’s our E-government system that showed us that there are loopholes,” Madut explained.

He said that they already have in place a monitoring team that investigated the issue of these quack cheques with the banks.