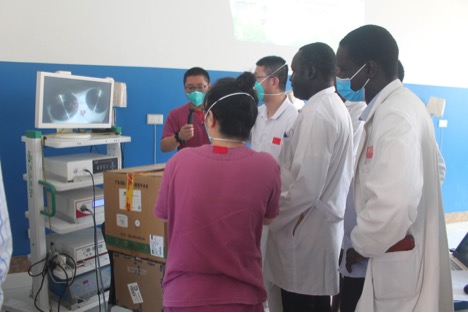 Members of the Chinese medical demonstrating on how to use a laparoscopy machine in Juba.
Home
Health
Denis Elamu·
Health
·8 months ago·2 min read

The one-day training was on Thursday conducted by Ding Zhen, general surgeon and team leader of the ninth batch of the Chinese medical team in the department of obstetrics and gynecology of Juba Teaching Hospital.

Moses Maror, head of the obstetrics and gynecology department, said the practical lectures have enriched knowledge of 20 medical practitioners who had no prior knowledge on laparoscopy surgery.

“This is a very great initiative from the Chinese medical team to have brought us the laparoscopy machine, so that our doctors learn to do laparoscopic surgery, because now days the world is slowly moving away from open surgery to major surgery that includes laparoscopic surgery,” Maror told The Juba Echo in Juba, the capital of South Sudan.

He disclosed that such collaboration with visiting Chinese medical teams enabled them to perform successful operation in 2018 on a patient with ovarian cysts.

“It is a great chance for our team to improve the services we are delivering to our patients because laparoscopy surgery helps reduce blood clotting and pain compared to open surgery,” Maror revealed.

Laparoscopy is a type of surgical procedure that allows a surgeon to access the inside of the abdomen (tummy) and pelvis without having to make large incisions in the skin. This procedure is also known as keyhole surgery or minimally invasive surgery.

John Mayor, a medical doctor who attended the training, admitted that they were used to only performing minor surgeries, adding that he had only learnt of laparoscopy surgery in text books.

“I already had an idea on how laparoscopy surgery is done but today’s practical lesson has improved my knowledge on it,” Mayor said.

Madhol James, another doctor said the practical skills have widened their scope of knowledge on performing complicated surgery.

“Laparoscopy surgery is a new thing to some of us, so observing it in videos and lectures actually widens our mind and updates our knowledge acquired from text books,” he said.

“This is another better way of doing open surgeries because here we do open surgeries but with laparoscopy it is much easier, has less complications and takes less time,” James added.

The ninth batch of the Chinese medical team has been training medical practitioners and treating patients since arriving to South Sudan last year.