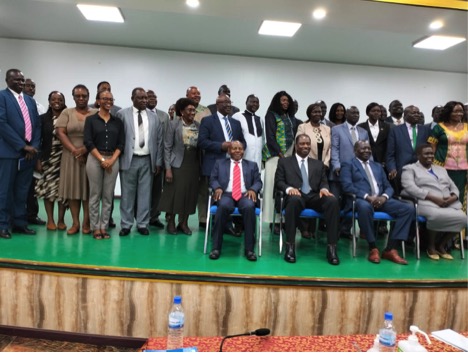 South Sudan and Uganda will hold business forum in July to raise awareness on investment and business opportunities for the citizens of the two countries.

Ocum Genes Karlo, South Sudan’s First Undersecretary in the Ministry of Trade and Industry revealed this on Wednesday in Juba, the capital.

“Today we had preparatory meeting between South Sudan and Uganda to continue our cooperation agreement to improve and promote trade between our two countries,” Karlo told journalists.

He revealed that officials from the two countries exchanged ideas on the private sector, and closer cooperation in trade and investment.

The South Sudan-Uganda Business Forum will take place this year.

Karlo said they agreed to renew the MOU signed 10 years ago between the two countries.

“It’s going to be redrafted and shared among the parties once it is signed,” he disclosed.

He added that the deal will facilitate free movement of traders from the two countries.

Uganda remains South Sudan’s biggest trading partner since her independence from Sudan in 2011.

“The Joint business forum is for business people in the two countries to meet and discuss their challenges and identify opportunities that can be explored to promote trade, investment in South Sudan and Uganda,” Balya said.

Both countries are members of the East African Community (EAC)- a regional trade bloc that aims to deal away with barriers hampering free movement of goods and people in the region.