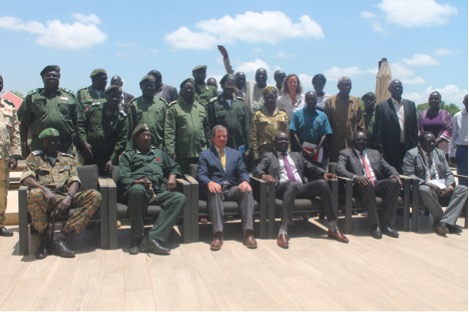 Rizik Zakaria Hassan, the Minister of Wildlife Conservation and Tourism said on Thursday that the 10-year agreement will ensure proper protection of wildlife species and also improve infrastructure in potential wildlife parks.

“We are expecting African Parks to utilize its vast experience of operation in many parks across the African continent to be able to change the narrative on wildlife and tourism in South Sudan,” Zakaria said during the signing ceremony in Juba, the capital of South Sudan.

African Parks is a non-profit conservation organization that takes on direct responsibility for the rehabilitation and long-term management of protected areas in partnership with governments and local communities.

Peter Loro, Undersecretary of the Ministry of Wildlife Conservation and Tourism, said the partnership with African Parks will particularly develop the Boma-Badingilo migratory landscape located near the Ethiopian border.

Peter Fearnhead, Chief Executive Officer of African Parks expressed optimism in his team rehabilitating game parks that have been affected by years of conflict since December 2013.

“This day is a momentous occasion, it signals long-term commitment as African Parks when we commit to the government we are there for the long term,” Fearnhead said.