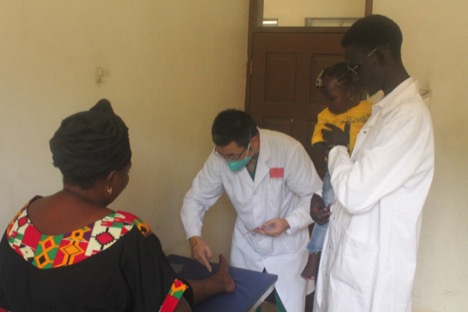 More and more patients suffering muscle and joint pains are increasingly opting for the Chinese herbal medicated plaster to get pain relief.

Yomima Simon, a 31- year -old mother was among hundreds of patients who turned up on Friday to seek treatment for arthritis and synovitis in the Orthopedic department of Juba Teaching Hospital in Juba.

She told The Juba Echo that she has been enduring immense joint and muscle pain since July, leaving her unable to move frequently.

Simon was able to get relieved of her pain after South Sudanese doctors and members of the ninth batch of the Chinese medical team applied Zang Qi pain relieving plaster between her muscle and joints.

Many patients with similar conditions such as Lomoro Samuel, a 42- year-old fleet assistant working with a humanitarian relief organization are opting for Chinese herbal medicine too after having failed to get relieved of joint and muscle pain.

Samuel for 10 years has been persevering with joint and muscle pain that even pushed him recently to travel to Nairobi for treatment.

However, Samuel’s condition persisted until he met Chinese orthopedic Liu Hefeng and his South Sudanese counterpart Michael Deng Achier who diagnosed him for his condition.

“Now I don’t know if this Chinese medicine will help me, but if my condition improves I will be grateful to the doctors here in Juba Teaching Hospital,” Samuel said after being treated.

Arthritis is a common condition that causes pain and inflammation in a joint and Synovitis occurs is when the synovium of a joint becomes inflamed.

The plaster is the preferred and most commonly used method in China to reduce pain in patients with knee osteoarthritis, as it causes few adverse effects.

Joyce Augostino, 49 -year-old farmer based in Jopa, in the Gudele suburb of Juba said after being treated for her joint and back pain that she had never sought treatment since January.

Prior to receiving treatment, Augostino had been unable to prepare her farm for cultivation due to back and joint pain.

She said she is now feeling relieved to start farming after being offered treatment.

Liu Hefeng, orthopedic surgeon and member of the Chinese medical team revealed that he and his colleague Deng treat daily about 20 patients with such conditions.

“Most of the patients who visit us suffer joint and neck pain, lumbar disc herniation,” Liu said.

He said most of these patients prefer being treated with plasters with Chinese herbs due to instant pain relief.

He added that they also handle patients with wounds and fracture.

“The major causes of these conditions common especially among ageing South Sudanese is because of engaging in intensive manual work without ample rest,” Liu said.

In addition, Deng said these are rare among youth because they engage in lots of physical activities such as games and sports that keeps them physically fit.

“Most of our elderly people are not physically fit because they do not engage in physical exercise which compromises their immune systems,” Deng said.

Deng who attended three- month training on maternal and child health care in Beijing obstetrics and gynecology hospital in 2019, hailed the effectiveness of Chinese medicine on most patients with Arthritis.

“Patients like it a lot because they feel instant pain relief without suffering side effects, it’s also good for patients with ulcers and gastritis,” he said.