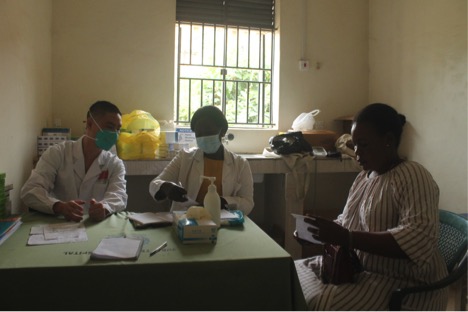 Joyce James, a-48-year-old South Sudanese woman had since January been unable to have a hot drink preferring cold water due to diabetes.

Her health condition has of late improved after visiting on Friday Juba Teaching Hospital where the doctors with the ninth batch of Chinese medical team diagnosed her condition and prescribed free medicines.

“My message to patients is that when you feel pain after the treatment, you need to return to Chinese doctors for treatment and you will see improvement,” James told The Juba Echo in Juba.

Yang Jie, a Chinese physician who treated James, said that on daily basis his team that includes South Sudanese doctors handles about 30 cases of diabetes and high blood pressure at the main referral hospital.

He said high blood pressure is caused by sugary foods and drinks.

“Each week we have two days of clinical work and on each day, we receive about 30 patients and the common diseases we are treating are high blood pressure, diabetes and stomach problems and ulcers,” Yang said.

Unlike infectious diseases, lifestyle diseases such as diabetes, obesity and high blood pressure are non-communicable. The main cause for these kinds of diseases is unhealthy nutrition, lack of physical body exercises, smoking, and drinking alcohol.

These diseases are also designated as silent killers.

John Otoo, a 54-year-old is among the several patients who received treatment from doctor Yang after enduring chest and joint pains for months.

He hailed the treatment he received from the Chinese doctor, adding that his earlier attempts at seeking treatment from private health clinics failed to improve his condition.

“I went to a certain clinics and I was given some medicines but the treatment did not succeed and that is why I came here to see the Chinese doctors,” Otoo said.

Sabina Kiyang Michael, a nurse working alongside Yang at Juba Teaching Hospital, said she has acquired extensive knowledge on treatment of diabetes and high blood pressure in her 6 -years’ experience working with various Chinese medical teams.

“I have learned a lot of things, we see how they treat patients with high blood pressure, diabetes and ulcers and yet we already have medicines for these diseases,” Michael said.

“For those who have diabetes, I learned how to check their blood random sugar and the kind of medicine that can be prescribed to someone suffering from diabetes,” she added.